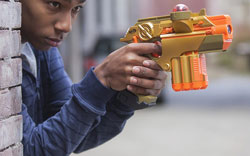 When a woman is pregnant, the question of what she can do while pregnant always comes up. Safety is always an issue, and it can be a rather problematic discussion. What if she endangers the baby while playing? How do other players feel about playing with a pregnant woman?

The short answer to this question is that it is possible for pregnant ladies to play laser tag, just like she’s able to do many of her usual activities. Being pregnant doesn’t force women to be bed-ridden until giving birth.

But obviously, the pregnancy changes things.

This is most likely the safest thing you can do when you’re not sure about playing laser tag while pregnant (or doing any other activity, for that matter). Just ask your doctor what you can and cannot do as the months pass.

More to the point, ask the doctor if you can play laser tag while pregnant, and when you should stop. Obviously, when you’re in your 9th month of pregnancy then your mobility will be an issue.

But many doctors do recommend that pregnant ladies still engage in mild and safe exercise, and laser tag can qualify as such. Laser tag can raise your heart rate, and you can still keep it safe by avoiding any running. 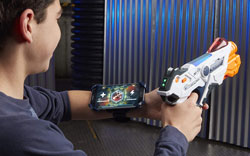 Just because your doctor says that it’s OK for you to play laser tag while pregnant won’t mean that your local laser tag arena will agree. That’s because this game will still require rather swift movements for players, and these movements can lead to falls and other accidents.

Your local arena simply may not want to take the chance of any trouble with your health (and the baby’s health too), when you’re playing in their facilities. After all, if something bad happens to you or the baby, someone might just blame them! It’s understandable that local arenas don’t want the legal hassles, or the moral blame.

Are the “Lasers” Dangerous?

Some people might be worried that exposing the pregnant lady and her unborn child to the “lasers” can be dangerous. Actually, this is the safest aspect of the game.

The game doesn’t actually involve actual lasers. Instead, it uses infrared light, similar to how your TV remote controllers operate. Just as it’s completely safe to point TV remotes at people, it’s just as safe as with laser tag weapons.

So, this is absolutely nothing to worry about.

If you’re expecting and still want to engage in some laser tag fun, you may want to heed the following tips. These tips can improve your safety while boosting the fun as well!

In most cases, laser tag games will be safe for you. This is especially true during the early months of your pregnancy, when you’re still able to move around freely. As long as no one violates the “no contact” rule and you take care not to run and trip, everything should be safe.

It’s up to you to pick which games suit your condition. Again, trust your doctor and don’t try to be “brave”. If you don’t think a laser tag variant is for you, then don’t force it.

It’s also up to you when you’re able to play laser tag. After all, if you’re currently experiencing nausea issues then laser tag may not be your top priority at the moment.

Still, listen to your doctor. And don’t blame local laser tag managers if they’re not happy about letting you play laser tag when you’re expecting. Try to keep it safe, and play until your doctor says otherwise!