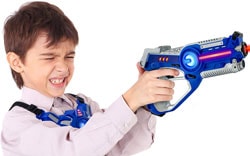 When you play games, it’s important that you realize the value of good sportsmanship. One of the first rules you understand when you’re young is that cheating is bad. If you’re a known cheater, you end up with no one wanting to play with you anymore.

Laser tag is an improvement on the basic “Bang, you’re dead” style of playing with toy guns, because laser tag offers a more reliable way of proving if someone has been properly “shot” and “killed”. There are fewer arguments about who was killed, since the sensors on the vests show evidence of any proper hits.

Laser tag is also a game that plenty of players take seriously. Some are so desperate to win that they resort to cheating, and you should always watch for that. But smart play is also rewarded in laser tag, and everyone wants to win. 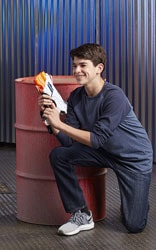 In any game, cheating refers to any sort of behavior that breaks the rules to give yourself an advantage. In laser tag, there are several types that you need to be aware of:

Covering and Disabling the Sensors

In laser tag, the most serious forms of cheating involve the laser tag sensors in the vests. After all, these sensors help prove if you were hit or not. If a player can disable the sensors, then it’s as if they were never hit throughout the whole game.

There are 2 major techniques for this type of cheating:

Covering the Sensors with Tape

Earlier versions of the vest sensors can be covered with something, and sometimes the infrared signals can’t get through these blockages. This can be pretty easy to spot, however, and if a player is caught then they may be sent out of the game.

In fact, it’s so looked down upon that some local arenas won’t let you play in their arenas again if you’re caught doing this. The people you’re playing with—even your teammates—won’t be impressed either. They may not want to play with you anymore, even in other laser tag arenas.

Some cheaters try to be more subtle by using tape to cover the sensors. This worked a lot with the older sensors, but more modern sensors and weapons are more advanced. In many cases, the infrared signals can now go through the tape.

Of course, you can be caught by someone doing this during the game. Also, it’s extremely difficult to last an entire game without getting hit, especially with large teams involved. The mere fact that you display zero hits on your vest will be met with suspicion of cheating. That’s especially true if someone distinctly remembers hitting you during the game.

Going Out of Bounds

In this type of cheating, you go where you’re specifically told not to go to. This type of cheating is more prevalent during outdoor games, since there aren’t any walls to delineate the boundaries of the gaming arena. So, you can hide out of bounds and not get hit, while you can hit the people inside.

Or, you can climb trees when the rules specifically forbid this for safety reasons. This can backfire spectacularly if you fall from the tree. Not only will everyone know you’re a cheater, but you get injured as well. 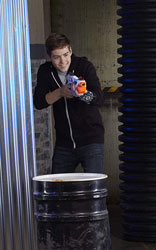 Of course, you can play properly and use clever techniques that can help you win. That doesn’t mean that these techniques are in any way can be considered cheating. It’s just about playing smart.

The specific tactics you’ll need to use to win will depend largely on the specific game variant you’re playing and the terrain you’re playing in. But here are general tips that should help you win, regardless of the game and arena:

It’s always a good idea to pretend to be a Boy Scout and to be always prepared. In laser tag, proper preparation will reward you.

This starts with your attire. Wear dark clothes to help you blend in more effectively in the dim arena. Make sure your clothes allow you to be comfortable while you’re able to move easily. Your shoes shouldn’t squeak or have any reflective surfaces, and it should allow you to move and pivot quickly.

Then you should also try to familiarize yourself with the gaming arena. It helps a lot if you’re playing in an arena that you’ve played a lot in before. But if you’re new to the place, at least get a map and try to memorize it.

Finally, have your team agree on signals to use so you can communicate silently during the game. That way, you can coordinate your team’s actions without making a noise.

Let’s start with the laser guns, which aren’t all the same. Usually, the newer laser guns perform better than the older models. They shoot better and more reliably, with a lower chance of failing.

Also, if you have time then you should find out which of the laser guns have the longest effective range. This may not matter much for indoor play, but it greatly helps for outdoor laser tag games.

Then we have the vests. Most vests have sensors at the front and back. Obviously, if you notice a vest without a sensor at the back, then it’s a great choice. But that almost never happens.

Still, some vests are “better” for you than others. These vests may have smaller sensors, or they may be in areas that are harder to hit. You may also go for the vests where the sensors are placed so that they’re blocked by your arms when you’re firing.

There are 2 different views regarding proper movement in laser tag. Once camp advocates constant movement, while another view is to camp out and let the enemy come to you.

Perhaps you should combine the 2 views. That’s to say, you can perhaps find a good hidey hole where enemies can’t see you as they move around. Then you can just ambush them as you can fire on them before they fire on you.

Among the places you should look for are areas located above the main floor. That is, if the gaming arena offers multiple floors.

But once you’ve ambushed a group of enemy players, you have to move and find a different location. It’s a basic tenet of sniper operations. You can sit still in a location when you’ve already revealed your location. That’s just asking to get killed.

When you do move, move briskly without making too much noise. Walk while crouching and use all available cover. When you’re at a corner, crouch first before you look around the corner.

While you can’t use anything permanent to cover your sensors when you play laser tag, there’s no rule that keeps you from blocking the sensors with your arms when you fire your weapon.

When you do fire, keep firing unless the game involves limited ammo. Non-stop firing increases your chances of hitting your enemies.

While we’re discussing firing techniques, we may as well emphasize that you ought to target the newbies and unskilled players first. It may seem “unfair”, but it’s part of the game. you target the enemy’s weaknesses.

It’s just like a quarterback always passing to a receiver with the least skilled cornerback guarding him. In basketball, it’s like going for a 1-on-1 low-post play with a bigger player trying to score a smaller guard.

Of course, it may not be good sportsmanship, especially if you target little Susie when it’s her birthday your family is celebrating. But then again, it teaches her to be better in future games.

There’s no shame in admitting that you want to win at laser tag. Plenty of people who engage in sports are naturally competitive. That’s why there are sports and games in the first place!

But there’s a difference between winning properly and winning by cheating. Cheating doesn’t really make you a winner. You know you cheated, and in your heart, you know you’re just a loser if you cheat.

But you can play smart, and that’s always allowed. Prepare properly, use the right equipment, and move when you have to. Winning always feel good, when you know you deserve to win!

Recommended Readings:
Is Laser Tag for Just Children, Or Is It for Adults Too?How much space do you need for laser tag?What are the rules of laser tag? Laser Tag Primer: Learning the RulesWhat is Laser Tag? The Newbie’s Guide to Laser TagThe Ins and Outs of Outdoor Laser Tag