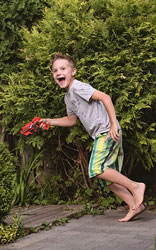 Laser tag is a fun game, and it feels much more “real” than any sort of military role-playing video game you’ll ever play. It may seem like it’s a game meant for children to play, but an increasing number of adults have discovered its appeal as well.

Laser tag is much like playing with toy guns. It’s just that it offers a more reliable system of scoring hits and kills than merely screaming Bang, you’re dead!

It uses the same infrared signals that’s used for TV remotes and sensors. Since these “laser” guns don’t fire pellets, it’s absolutely safe. It’s for this reason that plenty of parents aren’t worried that their kids are playing laser tag.

Sure, there’s always a risk of injuries due to tripping and falling. But then again, that’s always a risk for any sort of outdoor game that involves running around a lot.

Laser tag statistics confirm its popularity among kids, as its primary demographic is kids between the ages of 6 and 14 years old. They use safe weapons and enter a fantasy world of combat. When teams are involved, they learn the value of team play. They also learn about good sportsmanship when following the rules of the game. 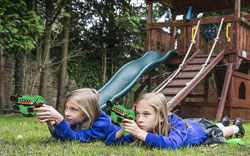 However, more adults have discovered that laser tag is not just for kids. When laser tag came along, most people thought it was just a passing fad. But it remains popular, more than 30 years after it first came out. It’s not just a fad, and its popularity among adults explains why laser tag just won’t go away.

In fact, right now it’s becoming so popular that it has more players than most traditionally popular games. By 2032 (or maybe even sooner), experts predict that it will be more than bowling.

Today (or at least, before the Covid stuff), there are at least 5 million instances of laser tag play in the US per month. It’s a very good choice for starting a business, because most laser tag business owners recoup their investment in just 2 years or so. It’s even recession-proof, since it’s been proven that during recession years these laser tag facilities enjoy brisk business nonetheless.

It helps that with adults playing the game, it’s not just game. It’s more like a realistic combat simulation, to be honest. It’s not hard to imagine some law enforcement officials playing laser tag often to practice their arrest scenarios.

Plenty of former military personnel like the game as well, especially former infantrymen. It offers the same sense of adventure and excitement of real combat, but without the trauma and the actual bloodshed.

Plenty of corporations also recognize the value of laser tag retreats for their employees. Laser tag offers a fun time for employees, which is always good for morale. But it also teaches good teamwork, while it also emphasizes the value of following orders.

Of course, there’s also laser tag for entire families. It offers an invaluable bonding experience between parents and children. How many things do different generations have in common? That’s not a lot, but both adults and kids can love playing laser tag.

It’s great for friends as well. If you and your friends are bored, then laser tag will give you the taste of adventure and camaraderie you’re looking for. It’s a lot more exciting than just sitting around telling the same old stories!

The truth of the matter is that laser tag is simply for people of all ages. That’s why it offers great family fun. Parents (and even grandparents) can play with their kids, and the adults don’t have to fake having fun. The really do have fun.

In a way, laser tag is like modern video games. While these games seem designed for kids, a lot of adults play them. The same thing goes with laser tag.

So don’t be embarrassed when you play laser tag, even when you’re all adults. It’s a game like basketball and football—adults can love it too, and there’s nothing strange about that!

Recommended Readings:
How much space do you need for laser tag?What are the rules of laser tag? Laser Tag Primer: Learning the RulesThe Difference Between Cheating and Playing Smart in Laser TagWhat is Laser Tag? The Newbie’s Guide to Laser TagThe Ins and Outs of Outdoor Laser Tag