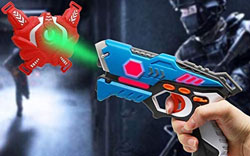 In the old days, our grandparents and the generations before them had wooden and plastic guns while playing games like “Cops and Robbers” or even “Cowboys and Indians”. Now due to more advanced technology, we’re able to do more than shout Bang at one another while claiming that the other guy is dead. Now we have laser tag, which uses the same technology used by TV remotes to indicate when someone is actually hit.

The rules are quite simple, though these rules can also change depending on the specific variation of the game. Specific arenas may also have rules of their own, most particularly for safety. It’s crucial that all abide by the rules so that everyone’s safe, and it’s a lot more fun when everyone knows who actually won. 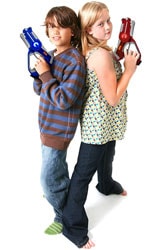 Regardless of the particular type of laser tag you guys are playing, some rules always apply. Here are some rules that you may not want to break no matter what.

Laser tag isn’t a contact sport. True, it’s a military combat simulation and in war movies you sometimes find combatants grappling with one another. Maybe you’ve even seen them do karate.

But in laser tag, there’s always a “no touching” rule in place. You have to shoot the enemy with your laser tag weapons, and not actually hit them over the head to knock them out.

In most places and games, if you touch anyone during the game then you’re the one who’s “dead”. You leave the game immediately, so there’s no benefit in touching any of the opponents.

But of course, you can theoretically keep that from happening by covering your sensors. But that’s also regarded as a form of cheating. Everyone’s sensors must always be visible. If you cover your sensors, then you’re considered out of the game.

That’s why you need to make sure your sensors will always be visible, no matter what. There should be no part of your clothes or equipment that can cover up the sensors.

What About Failed Equipment?

What happens when your equipment fails? While you can set up your own rules regarding this scenario, the basic rule is that if your laser tagger fails, then you’re out of the game.

It doesn’t matter if the tagger fails because you bumped it on a wall too hard, or it just failed on you. It may be bad luck, but like in most games, luck also plays a factor. That’s why it’s crucial that you check out your equipment first before you play. That way, at least you know for sure that your equipment works fine beforehand.

What about failure due to low batteries? You can avoid this issue by always having fresh batteries with you when you play laser tag. But in most cases, having low battery issues puts you in a “time out” status instead of “out”. You can then replace your batteries with new ones and rejoin the game.

In some cases, there may also be rules like not allowing players to climb trees or roofs when playing outdoors. This leads to much safer game settings.

Most laser tag games are like schoolyard basketball games—a certain level of honorable sportsmanship is expected from everyone. This is especially crucial when someone’s hit and they’re “out”.

If you’re “out”, you have to acknowledge this as quickly as you can. Put your hands and your laser tag weapon in the air and shout that you’re out. That way, you let everyone know that you’re out of the game.

When you’re “out”, you’re dead. So, you also can’t give any information to your teammates regarding the opposing player positions or tactics. Just shut up and get out of the game—you’re dead and you can’t tell tales!

There are certain scenarios that you can agree on to suit everyone’s tastes, or to fit your numbers. Here are some laser tag versions you can play, along with their basic rules:

As the name implies, you’re on your own and everyone’s the enemy. This is a version that everyone can play, regardless of how many of you there are.

Even this version can be played in different ways.

This is an old game that generations of kids have played, but now we have the laser tag version. There are 2 teams, usually with at least 4 players each. It’s usually played outdoors, preferably with plenty of obstacles. You also use 2 flags with different color. The object of the game is to capture the opposing flag, and usually you have to return it to your own base.

You can always play your own version of laser tag, and set up your own rules. The main point is to keep safety in mind. Also, all players must know and abide by the rules.

Finally, the main rule of Laser Tag is to have fun!

Recommended Readings:
Is Laser Tag for Just Children, Or Is It for Adults Too?How much space do you need for laser tag?The Difference Between Cheating and Playing Smart in Laser TagWhat is Laser Tag? The Newbie’s Guide to Laser TagThe Ins and Outs of Outdoor Laser Tag