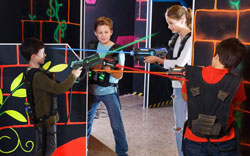 The days will eventually come when we can all get out of the house, and when the kids (and the kids at heart) can one more play with other kids. But with any game that involves running around, there are always safety concerns.

These days, parents are more aware of the dangers of sports like football, which can lead to eventual health issues due to concussions, plus the great risks of broken bones. Other contact sports can also be inherently dangerous, due to how players can bump on to one another.

Playing with air guns is generally considered safe as well, but it can be dangerous for kids. After all, they’re firing actual pellets that can hit players in the eyes. These pellets can do substantial damage especially at close range, when fired at the face or other exposed areas.

But what about laser tag? Compared to airsoft games, laser tag is much safer. Still, there are health and safety issues that must be addressed.

The Use of “Lasers” 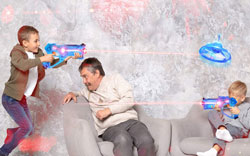 If you’re like some people, you see the word laser and you immediately think of the weapons in sci-fi movies, or some convoluted gadgets used by certain James Bond villains. Or maybe you know that they’re used for some types of industrial manufacturing processes, or even for some types of surgeries (like LASIK).

But here’s the main thing about laser tag—the game doesn’t normally use lasers at all!  That makes it super-safe.

Actually, there are several types of systems used for laser tag. The most popular system uses infrared instead of lasers. These IR signs are safe—they’re exactly the same type of light communication used by your various remote controllers. You can point that TV remote at your own eye as you press the various buttons, and it won’t do you any harm.

That’s how the game works. The players wear vests like the TV has remote IR receivers. The vests light up when you fire your “laser” weapon and hit the receivers, just like your TV turns on when you use the TV remote when it’s pointed at the TV.

What About Other Injuries?

Laser tag is still a physical game, so it’s a bit more dangerous than lounging on your couch watching TV. It’s like playing tag, even without the “laser” aspect. With players running and jumping around, there’s always a chance of some sort of injuries.

Here are some injuries that have been reported during laser tag activities:

But it must be noted that these injuries are very rare, especially the more serious ones. You only risk injuries because you’re probably running, and that runs the risk of tripping and falling.

Even without “dangerous” lasers, all that physical activity can lead to physical injury. Here are some tips that should reduce the risk even further:

Laser tag is actually safe. In fact, it’s meant for players of all ages. If a kid is old enough to play tag, then they’re likely old enough to play laser tag. They may not win against more serious players, but they sure will have fun. And isn’t having fun the whole point of any game?