Laser tag is one of the most popular games around, because it’s seemingly simple. But it’s a combat simulation as well, which means it can get complicated too.

Basically, it’s a more sophisticated version of playing with toy guns. It’s just that you have a more reliable way of scoring and “killing” than just screaming Bang, you’re dead at your opponents. You also don’t fire bullets or pellets at one another, which makes the whole thing a lot safer (and a lot less painful).

So, how to start? Here are some steps that should help you out:

Gather Friends and Family Who Want to Play

True, you can play on your own with strangers. But it’s a lot more fun to start by playing with friends and family members. It’s all good fun with people you know. There may be some teasing (especially if you’re new and you don’t really know what you’re doing), but it’s better than having to deal with insulting strangers.

With family and friends, you can play with teams. It’s best if there are at least 6 of you. The more the merrier—it’s great if you have 30 people in the group for some rollicking good time. 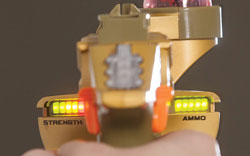 While you can play outdoors using your own laser tag equipment, if most of you are new to the game then a local laser tag arena is your best bet. That way, you get the equipment you need, plus experts who can brief you on the rules of the game.

It’s not all that expensive either, since it’s like a night at the movies. Laser tag will cost you maybe $10 to $15 per person.

Of course, you should bring more money. Local arenas tend to have snack bars, and some even have arcade games for kids to pass the time with while waiting for others to finish.

Everyone should wear darker clothes, and their outfits should be comfortable and allow for easy movement. You’re going to move a lot in this game, and your dark clothes can help you blend in with the dim surroundings of the game arena.

When your group gets there, split into two teams. Try to even things up for a fair match. If there are experienced players with the group, distribute them among the 2 teams evenly so each time has experts to turn to.

Sure, there are game variations that allow for 3 or 4 teams battling each other. But that can be rather complicated, especially for newbies. It’s better to just have 2 teams first to ease people into the game.

Test the Laser Guns and Wear the Vests

Some laser guns have cartridges, meaning that you don’t have unlimited ammo. When you run out of shots, then you have to reload with a new cartridge or recharge your spent cartridge.

Now wear the vests. The vests carry the receivers for the infrared signals that your laser guns emit. You generally have sensors in front and at the back. In some arenas, you may even wear headbands or helmets with sensors to allow for headshots.

Learn the Local Rules and Check Out the Map 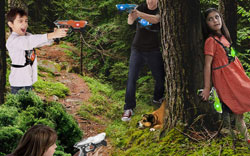 Before you play the game, usually there’s someone in the arena who will tell you about the local rules of the games. You may also get a brochure, with the rules printed there as well as a map of the gaming area.

There are several possible varieties of the game, just like there are many different ways to play tag. Usually, with teams you can start with simple elimination games. That’s to say, the 2 teams shoot at each other until one team eliminates the other team completely.

Another popular version is to score points, with the winner scoring more points than the other team. You can score points by “killing” opponents. Some game versions have special VIP roles for specific team members, and killing those VIPs may earn more points or even win the game outright.

But the basic mechanics of the game are very simple. You just have to “kill” your opponents by aiming your laser guns at their vests or headbands. So, you should know the value of ambushing opponents or using superior numbers or positions.

At the same time, you should keep the enemy team from killing you. So, don’t make noise when moving and try to keep under cover.

Prepare for the Game

Before you head out, maybe you can establish some sort of chain of command first, so that your team knows who should give the orders. That way, your team can work together more effectively. That’s better than just having team members heading out and doing their own thing.

You should work together, and that means communicating effectively. Try to establish hand signals so you can communicate in silence. Have people learn the signals for Stop, Go there, and I think there are people hiding over there.

Enter the gaming arena, and set up the team. Usually, there’s an assigned area for each team. If there isn’t, then you’ll need to find a secure location with plenty of cover.

The game starts usually when the buzzer sounds and the lights dim. Your team can then split up a bit while moving towards the enemy.

In simple games, the objective is to just kill off the opposing team members before they kill you. But there are more sophisticated versions that involve capturing a flag or protecting a “king” or VIP. It may be best to play those more advanced versions when everyone is more familiar with laser tag.

You just have to aim at the opponents. More specifically, fire your laser gun while aiming at their vests. Some laser guns may also carry sensors, so aim for those too. When you hit them, you score points for your teams.

When you hit your opponents, there are versions of the game in which these opponents are officially “dead”. That means they’re out of the game.

Other versions of the game allow for each player to have several lives. That means when they’re dead, they have to run back to a specific location to gain another life.

Then there are other games where players are only “stunned” when you hit them. Usually, that renders their laser guns inoperative for a few seconds (maybe 5 to 30 seconds). Hit them to rack up points while they scurry away while waiting for their laser guns to work again.

Of course, you should also think about not getting hit. So, try to fire from cover, and keep your head down when they’re firing at you!

The game ends when one team is completely eliminated, or when the time for the game ends. The buzzer sounds, and you can start a new game if that’s allowed.

It’s best to keep things simple when everyone is new to the game. But it really is simple. Laser tag doesn’t have to be overly complicated. Though you and your buddies can try more complicated versions of laser tag as you become more proficient.

But the first rule of laser tag is the simplest of all—have fun and stay safe!