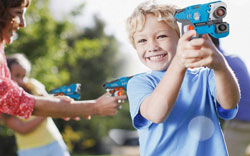 How many minutes does a game laser tag last? Let’s compare it to basketball, to give you a better idea.

Then you have US high school basketball, which usually has 4 quarters of 8 minutes each. But that depends on each state, which may have different rules.

The point here is that if you have different rules for an official game like basketball, then you can expect that you will also have different time rules for laser tag. After all, laser tag isn’t exactly a sport you play at the Olympics—or at least, not yet!

It Depends on the Venue 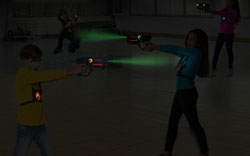 Each administrator for a local laser tag arena can just simply impose a time limit for games. But it’s very common for these places to let large parties rent the gaming arena for 2 hours. You have 20-gaming periods, with time breaks in between each period.

Many places also let you play for an hour, usually for 2 games or gaming periods inside that hour. It’s a pretty standard time frame.

If you’re new to a local laser tag arena, then you should just find out how long each game lasts, and how long you can rent the place for your party.

It Depends on the Game

There are some games (especially for warmup) that don’t last long at all. Some games only last 3 to 5 minutes, during which it’s a free-for-all “kill everything that moves” scenario.

On the other hand, you can have longer games that last for half an hour or even more. There are large-scale outdoor combat simulations in laser tag that can last for several hours.

It Depends on the Players

A few years ago, there was a comprehensive survey that involved laser tag operators and players in 8 different countries:

One of the questions was about how minutes of laser tag were ideal for each player. These are their responses:

So, that’s 76% of the players who think games should last 10 to 20 minutes. That’s not really surprising, if you think about it. Most basketball quarters actually last that long, when you account for the time stoppages.

When you enter the local laser tag arena, it’s not as if you can just play immediately. You need some time for other activities.

You should also take into account that during the game, it’s not always continuous combat. There will be some “quiet” times, when you’re slowly moving about each corner, peering around trying to find the enemy. Of course, when the shooting starts, it can get frenetic!

A game of about 15 minutes sounds about right, though it’s not surprising if you prefer a somewhat short or a somewhat longer game. As for how long you can play—that’s always up to you!