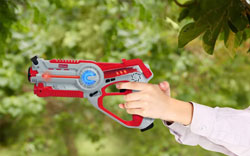 Plenty of people consider laser tag as the safer alternative to air guns (and obviously to real guns as well). With air guns, you fire pellets that can sting when it hits your skin. There’s even the greater chance of more serious injuries if the pellets hit the face, and especially the eyes.

Laser tag is safer because these guns don’t fire any pellets at all. They’re a lot more like toy guns, since you fire them, and your targets light up when you hit them. But how does that really work, exactly? And isn’t laser tag dangerous, because, duh, there are lasers?

This guide will clarify all these matters, so that you have a clearer idea of how things work. Don’t worry, as we won’t go overly technical with our explanations!

The best way to explain how laser tag works is to compare it to how your TV remote controllers work. We all have TV remotes, and we all know how to use them, after all.

We just have to point the TV remote at the TV and press the right buttons, and the TV responds to what you want to happen. So, you can turn the TV on or off, change channels, or increase the volume without standing up from the couch.

The TV remote uses infrared light (IR) to send the signal to the receiver on the TV. That receiver is usually located at the bottom of the front side of the TV. You have to aim the TV remote towards the general direction of the TV for the TV to get the IR signal. If you aim too far from the TV, then the TV doesn’t respond the right way. 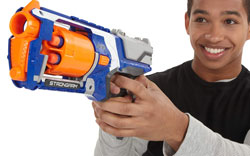 The usual laser tag system works like the TV remote setup. You just have your laser gun emitting the IR signal, instead of actually emitting any sort of laser.

That makes the laser weapon system absolutely safe. You can press your TV remote or your laser tag weapon towards anyone and there won’t be any harm done.

Of course, there are some variances regarding the accuracy of these weapons. Some laser tag weapons have to be fire at the exact right position and direction to hit their target. Other laser guns are more forgiving, so you can be off by a few inches and still register a hit.

Some laser guns have LCD displays that show how many kills you’ve made during the game. That’s a handy way to keep score.

In laser tag, you wear the receiver on your person. Usually, you don a vest with several receivers embedded on it. So, if someone hits your torso, the receivers will register the hit and usually light up to signal the hit.

In some cases, some games have players also let players wear headbands or helmets with IR receivers as well. That way, the allows for head shots too.

But there are some systems that have receivers on the laser guns as well. These are more specialized systems, as the receivers also tally the hits you’ve taken. It works nicely with games that allow each player several lives, so the laser gun can keep track of how many lives you have left. 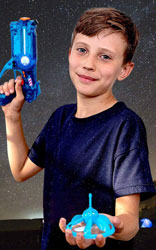 While most systems use IR, there are actual laser tag systems that literally use lasers. The lasers allow for greater accuracy, so hits don’t generate simply by aiming the laser gun in the general direction of the target.

While lasers in laser tag can be dangerous, most of these systems have inherent safety features to minimize the danger.

In almost all cases, the power of the laser light used in these systems are extremely low. They’re certainly not powerful enough to cut through flesh (or steel, if you have plans of becoming a James Bond villain). That means if you hit people’s skins with the laser, you don’t hurt anyone.

Theoretically, there’s a risk that you can hurt someone if you deliberately hit their open eyes with the laser. But that’s extremely unlikely. The instinctive response of most people, when hit in the eyes by bright lights, is to blink or close their eyes. They also turn their eyes away from the bright light.

With the low power and duration of the exposure of the eyes to the laser, there’s no real harm done.

Some lasers also limit the duration of the laser to a very short time. That way, you can’t target someone’s eyes for very long. You don’t have to rely on those people closing their eyes and turning away. The laser automatically turns off in less than a second.

In many cases, the laser guns also have several features that you’ll need to keep in mind so you can use them properly.

When you’re firing your weapon, you need 2 hands. One hand is on the grip, with a finger pressing on the trigger.

That means you really need 2 hands. This is to discourage players from using 2 weapons simultaneously. Also, it prevents you from using your spare hand to grapple with the enemy.

Laser tag is a no-contact sport, and you’re usually told to keep your distance from opponents. You’re not supposed to get within 5 feet of them, to be on the safe side.

To reinforce this rule, some laser guns won’t fire at all if you’re too close. So, keep your distance and fire at will!

Laser tag is actually safe, and the weapons work admirably well. You may want to experiment with it, to know how accurate you have to be when aiming. You may also want to discover the range of the weapon. Discovering these things is actually part of the fun of laser tag!