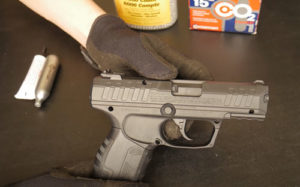 Are you looking over this Daisy Powerline 426 review because you need a reliable sidearm for your airsoft adventures without spending too much money? Then, you’re in luck, as you may have found what you’re looking for. In its price range, the Daisy Powerline 426 may be one of the best airsoft pistols around, and it is certainly worth your consideration.

This is made in Japan, so it should assuage your concerns regarding airsoft weapons made outside the US. Japan (along with Germany) is one of the countries where they take airsoft weapon manufacturing seriously. 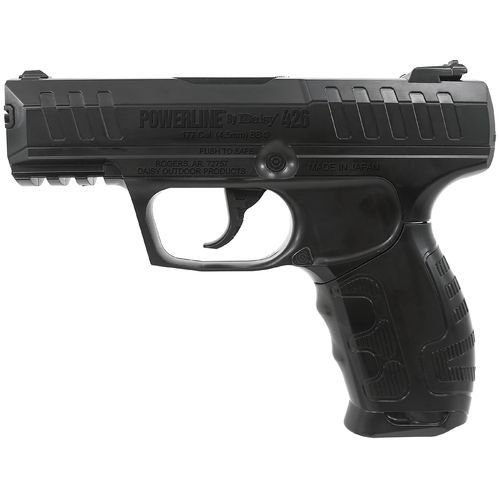 Pros and Cons of Daisy Powerline 426

Features and Benefits of Daisy Powerline 426

Yes, it’s one of the most affordable CO2 pistols out there. Ordinarily, this may make you suspicious, but there’s really nothing wrong with it. In fact, it’s terrific considering the price.

What’s more, the craftsmen in Japan who made this airsoft pistol made sure that they did things right. There are no quality control issues. They offer a nice 1-year warranty, and they offer great customer service as well. They’re not evading any responsibility if there’s anything wrong in the pistol. That’s because they know for sure that nothing will go wrong with it.

This will fire .177 BBs using 12g CO2 cartridges, and the built-in BB magazine can hold up to 15 BBs. It’s powerful enough to fire the BBs at a velocity of 430 fps, which explains the theoretical range of 209 yards.

Try this, and it should give you reliable performance for a few years (at least). At this price range, it’s an absolute steal.

It does help that plenty of the parts, such as the barrel, is made with smooth bore steel. But it’s still a lightweight pistol, weighing in at just 0.93 pounds.

This won’t punish your hands like a real pistol would, so you can maintain your aim even if you fire your BBs quickly. The weight isn’t really all that much, so fatigue isn’t a factor.

This isn’t a pistol that you’d use for long-range shooting. Never mind how the product description says that its range goes up to 209 yards. Sure, it has a blade front sight with a fixed open rear sight. But in most cases, you won’t be using the sights (and a sandbag) to fire this.

Instead, you’re going to use this mostly for close-range combat. It’s a great backup for your main rifle as well. It’s powerful enough to give you a velocity of 430 feet per second.

Try this out on a range, and you should be satisfied with its accuracy. We tried it out ourselves, firing at a target 10 yards quickly, just to see how well it shoots in realistic conditions. When you fire this quickly without aiming to hard, you’ll find most of the shots clustered around the bull’s-eye with most 6 inches from the center at the most.

There were a couple of outliers, which is normal when you’re trying to shoot quickly at a fair distance. For close quarters (which is what you’d probably use this for), it’s very hard to miss especially if you have some skill in aiming at moving targets.

Of course, for practice plinking in your backyard, it’s fun to use as well. The velocity and reliable accuracy can reward you when you develop your aiming skills. It’s fairly accurate, and it won’t embarrass you to your friends.

In an airsoft battle, it can be very annoying to find yourself losing CO2 power when you’re in the middle of a firefight. Here, that’s not a problem at all.

All you really need to worry about is to reload quickly. Just practice putting in your BB cartridges, and you’re good to go. It takes a long while to feel that you’re losing power. You have to fire about 5 fully loaded BB magazines before you’ll notice that your velocity isn’t as great as when you started.

The pistol also holds the CO2 power nicely, without leaking. In fact, we tried to leave on the CO2 in the pistol. After a week, we checked and found that the CO2 was still there.

Despite the price, this isn’t a toy. In fact, it looks so much like a real pistol that you don’t want to brandish this around in your neighborhood. You have to respect it.

The good news is that it comes with a button safety that’s easy to use. Just press it down, and it’s on. Press it again and the safety is off. You can easily see (or feel) if the safety is on or off.

This is a crucial feature, since plenty of folks use this as a practice pistol for the real thing. You can each pistol newbies about responsible pistol ownership, so that they can then own a real pistol responsibly.

Just check that the gun complies with local airsoft pistol rules regarding its appearance. The unit we got didn’t have that orange plastic tip to indicate that it’s a replica. Its appearance makes it look real, and in some situations that can be very problematic.

How far will Daisy 426 shoot accurately?

Despite the stated maximum shooting distance of 209 yards, you’ll want to stay within a distance of about 20 yards. With enough practice, you may be able to get 3-inch groups with careful aim.

If you fire very quickly, that will enlarge to 6-inch groups. But for real airsoft conditions, that should work out nicely. You’ll still hit your opponents.

Does it include co2?

No, it doesn’t. You’ll have to buy your own. But it’s unrealistic to expect that it comes with CO2 since it’s already too affordable.

Can this shoot hollow point pellets?

It’s not recommended. You just better stick to the recommended 0.177 BBs instead.

How many shots before you run out of c02?

That depends a lot on the temperature. But in general, you can use up about 5 fully loaded magazines before you feel a real dip in the CO2 power level. So that’s about 70 to 80 shots, at which point you should reload your CO2.

Can the daisy red dot sight fit on the Daisy 426 handgun?

Sure, as the integrated accessory rail can fit it in. That works nicely for target practice and accuracy competitions in your backyard.

We tried the Traction Laser Sight, which really adds a lot of fun to the pistol. It looks cool too.

But in actual airsoft battles, you may want to ditch the laser sight. You just won’t have time for careful aim.

Is it a blow back pistol?

No, it’s not. There’s no force that punishes your hand when you fire this, which is why it’s so popular. It doesn’t affect your aim when you fire quickly, and your hand won’t get tired quickly.

The lack of the blowback feature is actually a good thing, if you’re training your kids to handle pistols responsibly. They can then focus on the more fun aspects of pistols as well, such as firing at tin cans.

Will this fit the same caliber pellets or is it BBs only?

Just use it for BBs only, to be on the safe side.

We all know that your airsoft hobby can be rather expensive in the long run. But you also need a pistol for a sidearm, in case your main rifle fails during an airsoft battle.

The Daisy Powerline 426 solves your problem nicely, since it’s very affordable. It’s also well-made, which means it’s unlikely that it will break down too soon that you’ll have to replace it too quickly.

Despite the low price, it’s certainly not cheap when it comes to its performance, either. It’s very reliable, and it should work each time. It feels great in your hand, and your BBs go in the general area you’re aiming at. It does have a long-range, but in close-quarters combat this won’t miss at all.

Try this, and you will find it more than adequate for your needs. It’s certainly a surprising find, given the low price. With the Daisy Powerline 426, you get a great little pistol without putting too much of a dent in your budget.