Plenty of people who know very little about airsoft rifles typically ask what is a PCP-powered rifle when they first hear about this type of rifle.

After all, even people who have never held or fired airsoft weapons know that they can be powered by CO2 cartridges, rechargeable batteries, or by a simple spring. When these people here about PCP guns, they might immediately think about that illegal drug that supposedly turns junkies into crazed, violent criminals.

So, What is a PCP Airgun?

While some articles refer to this type of rifle as a PCP airgun or as a PCP-powered air rifle, others just call them “pre-charged” rifles. These terms all refer to the same thing.

It means that the propellant in the air rifle is just pain breathable air, except that it’s been compressed to a very high pressure level. The gun’s air tank may have an air pressure within a range of 2,700 to 3,000 psi (pounds per square inch).

To give you an idea of what that means, think about the air pressure in the tires of your car. On average, that pressure is set at about 30 to 35 psi.

When your car tire bursts, you may notice that the air bursts out with an extremely high degree of power. Now imaging the propellant power of air pressure that’s a hundred times more powerful!

How Does a PCP Air Rifle Work?

All airguns that use PCP as their propellant tend to work the same basic way, whether they’re among the premium models or they’re entry-level guns.

When Were PCP Air Rifles First Made?

Due to the popularity of rifles powered by rechargeable batteries, gas cartridges, or spring power systems, some people assume that it’s a fairly new method of powering air rifles.

That’s not exactly new, because this is old technology. The oldest mechanical air gun that still exists today dated back to 1580.

It was used by the Austrian arm from 1780 to about 1815. In fact, Austria, France, and some other countries had special sniper army groups that used this type of rifle.

The folks that were part of the 1804 Lewis and Clark Expedition demonstrated air rifles to all the Native Americans they encountered.

The first commercially-produced air guns that became popular came out in 1886. By 1899, competitive target shooting with air rifles became so widespread that more than 4,000 air rifle clubs existed in Great Britain alone.

It became much less popular, however, as since rifles using gunpowder became much more reliable after WWI. But it was relaunched in the 1980s, and today it’s still a favorite among some hunters.

How Does a Pre-Charged Air Rifle Work?

Inside the air gun, there’s a hollow tube with the highly-pressurized air. When it’s filled at the right pressure (typically around 3,000 psi), you’re ready to rock and roll.

How to Charge PCP Air Rifles 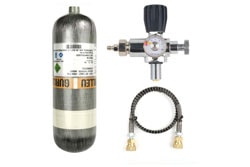 You have 3 main options for this task.

This is similar to a bicycle pump. With this, you have a rather portable way to recharge your air gun and you won’t run out of air power.

With this, you’re able to stop at any psi level you want. However, it’s a hassle to use once you go past 2,500 psi.

It’s comparatively cheap, and it’ll last you for years. You just want to have a moisture filter with this so you can avoid letting in water into the gun tank when you recharge.

This is usually made of aluminum or steel, and it’s obviously not as easy to carry around. Eventually it will also need to be refilled, as you use it for recharging your air rifle.

However, it sure is easy to use as you can refill your air gun tank in a few seconds. The air inside has already been filtered, so you don’t let in any moisture into your air rifle that can cause rusting issues.

Just keep in mind that this is a more expensive option compared to the hand pump.

This is smaller than the scuba tank, and it’s easier to bring along.

It’s just as easy to use as a scuba tank, and you even get more refills out of it.

Because of all these advantages, it’s more expensive than the scuba tank.

How Many Shots Per Recharge?

So, once you’ve recharged your air rifle, how many shots can you expect to take before you need another refill?

This depends largely on the type and model of your air rifle. Some only give you a little over 30 shots, but other air rifles can go for almost 400 shots before needing a refill.

How Long Does the Air in the Tank Last?

Again, this depends on the type and model of the air rifle.

The good news is that you won’t be taken by surprise when you’re running out of air in your rifle tank.

Most PCP air rifles come with a gauge that indicates the remaining amount of air.

How Accurate are PCP Air Guns?

None of the other airsoft power systems can compare to PCP when it comes to accuracy. Only “real” rifles using actual gunpowder bullets are more accurate.

This is because the power of the compressed air is much higher than what you get from springs, CO2 cartridges, and rechargeable batteries in AEGs.

PCP air rifles are also easier to shoot. It’s like a basic modern camera, as you literally just point and shoot.

There’s no learning curve to overcome, and the lack of recoil is also a welcome feature for newbies.

With spring-powered systems, for example, you first need to master the right holding techniques. The lack of power from these systems also mean that your pellets can’t get the range that you can with the PCP air rifles.

The only “problem” with PCP air rifles is when you don’t have a regulator in your air rifle that makes sure you get the same amount of air pressure for each refill.

If you get to too high of an air pressure, the velocities of the pellets can be inconsistent at first until it levels off. You’ll need to learn how to adjust the air refills to the same amount each refill.

That’s why you need a PCP air rifle with a regulator. Your shots are more consistent right from the get go.

What Types of Caliber Can You Shoot with a PCP Air Rifle?

Compared to CO2 air rifles, you certainly can go with higher calibers with the PCP air guns. That’s because more air is pushing the ammo with the PCP, compared to the CO2.

With the PCP, you can go with a higher caliber and still get an impressive velocity for your pellets.

How Much Noise Do You Make with PCP Air Rifles?

Let’s put it this way: compressed air rifles were known as “poacher’s rifles” by around 1900 because it’s so quiet and there’s even no muzzle flash. Compared to other types of air rifles, these things are virtually silent.

That means you won’t startle others when you fire it, and it’s great for sniper duty if it’s allowed in your combat simulations.

So, let’s tally all the benefits:

PCP air rifles aren’t as big as you’d think, so they’re easier to bring along and use for hunting. Even kids won’t have any trouble for its size.

This is one of the most notable advantages of PCP rifles, compared to other power systems in other airsoft rifles.

The amount of power you get is much greater, so you can get a flatter trajectory for your pellets. You’re able to get much better range, and the grouping size for your shots will be much smaller.

Go to YouTube, and you’ll find lots of “funny” videos with people having trouble with recoil. Sometimes you can even hurt your shoulders with the powerful recoil you have to deal with when you’re using actual firearms.

With this, there’s no recoil at all. That makes it much more comfortable for newbies and even kids to use.

The lack of recoil also means you can keep your rifle aimed at your target after taking the shot. You don’t have to lose sight of your target and there’s no need to reacquire the target in your sights.

There’s no learning curve for this type of rifle. They’re so easy to use that kids won’t have any trouble with them.

It’s like using a modern disposable camera. Point and shoot—it’s not more complicated than that.

You can use PCP rifles for vermin, or for squirrels, and rabbits. Some of these PCP rifles can actually work for deer.

Remember, these things are extremely accurate. You can also use higher caliber ammo.

You don’t cause a ruckus when you fire your PCP rifle in your neighborhood. If you fire a real rifle, you might alarm the neighbors.

There are some drawbacks that you need to keep in mind, however.

These PCP rifles can be expensive. While you can get airsoft rifles under $100 or even under $50, that’s just about impossible with PCP air guns. Prices for the good ones start at around several hundred dollars. Some of the better ones even cost more than a thousand bucks.

This is the other main drawback. You can just buy CO2 cartridges for your CO2 gun, and plug in your AEGs to recharge the battery.

But with PCP air rifles, you don’t really have any convenient options.

Either you do it the long and hard way with the hand pump, or you spend a lot more with scuba or carbon fiber tanks. You’ll also have to bring these things along when you use your PCP air rifle.

Are PCP Air Rifles Worth Buying?

This is the key question, and it’s for you to answer. However, for most people it sure is worth the cost and the refill hassle.

You get fantastic accuracy even with higher caliber pellets, and it’s easy to use. It’s quiet, and there’s no recoil.

These advantages explain why for some PCP air rifle fans, there’s no going back to other airsoft power systems.

So, what is a PCP-powered air rifle? It’s the air gun you want to use if you care about accurate shots at longer distances!

Recommended Readings:
What is the Difference Between AEG Entry Level, High Grade Entry Level and High Grade AEGsWhat are the Best Ways to Protect Your Face when Playing Airsoft?How to Clean an Airgun Barrel: The BasicsHow to Unjam a BB Gun or Airsoft GunHow To Adjust A Scope On An Air Rifle?