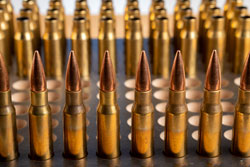 There’s a lot to know about a gun, and we cannot cover them all in this one short article. However, we can tell you, though, everything you might want to know about what is a bullet casing.

Let’s get right to it since we don’t want to waste your precious time.

What Is A Bullet Casing?

A bullet casing is pretty much called a shell casing. It’s the shell that covers or holds the inside of a bullet.

What is a bullet casing made out of? The bullet casing is the metal-made piece of ammunition that’s often made of brass, but are made of other material types as well.

These bullet or shell casings will also be made depending on the kind of ammunition fired from either rifle, pistol or a shotgun. It’s not really the bullet itself, but is the larger ammunition mechanism loaded into the gun’s chamber before it is shot.

To learn how the shell or bullet casing takes part or runs into the mechanism of a gun, see this video below:

What’s the difference between a bullet, a casing and a shell/round/cartridge?

What does the casing do?

The first thing that a casing does is that it holds the propellant. The propellant is made of loose powder mixed with the ignition source, aka the primer.

These are together attached to the bullet. What the casing does is that it allows all these components to be held in one place to be inserted into the gun.

The second thing that this casing does is that it protects the primer and the powder from unwanted contamination and moisture. Before the existence of unitary cartridges, rain and water issues were a big problem, and that’s how the casing came into being to respond to the need.

The third reason for the casing is that it acts as a gasket. It helps in expanding slightly to seal the chamber, making it possible for breech loading to be more practical.

This expansion and shrinking system makes brass and mild steel to be the perfect material for casings, since they’re strong but also flexible.

So there you have it: you now have the best ways to maximize your bullet casing by learning what it basically is.

As a summary, you just learned not just what a casing is, but also some of the needed information you need to know about what is used to match a bullet to its casing.