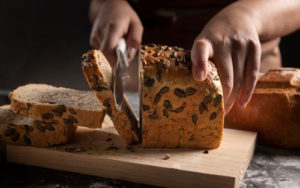 It’s always a good idea to first do some research on the kind of steel you’re getting in the blade when you’re buying a knife or some important cutting tool.

The blade steel is what matters the most, more than the handle material or even the brand of the knife. So, if you’re checking out VG10 steel because you’ve read that some of the knives you fancy use it, then you’ve come to the right place.

With this VG10 steel review, you’ll know exactly what it can do. You’ll check out the features, the benefits and drawbacks, and even the specific elements and amounts of each one in its mix. That way, you can be sure you know what you’re getting.

Japanese steelmakers came up with VG10 steel only recently, though an increasing number of US brands have begun to use it for their knives. They started with the VG-1 steel and then made a lot of improvements across the board.

If you’re familiar with other steels, then it has lots in common with the ATS-34 and 154CM steels. It’s just that the VG10 steel has a bit more chromium than those 2 steels, so it does better at resisting corrosion. It’s actually a type of stainless steel too.

Also, the vanadium in the VG10 steel recipe gives it a little bit more toughness. That, plus the slight hardness reduction from the VG-1 steel really makes it more unlikely to chip.

VG10 steel is a high-end steel that can get quite hard, so it can give you great edge retention. Just be careful, as the blade can be very sharp.

VG10 steel is actually quite common, as you can find it in many types of knives. These include:

The VG10 steel is popular because it does well across the board. It’s hard, but reasonably tough. It’s also a type of stainless steel, and that’s also one of the reasons why it’s a favorite steel for lots of professional-grade knives. It’s like you’re wielding a katana in the kitchen.

Here are the most important elements in the VG10 steel recipe, and how much there is for each element:

Carbon, 1%:  This is a lot of carbon, which is why it’s so good at retaining its sharp edge.

Molybdenum, 1%: Very few steels have more molybdenum in its mix than VG10 steel. This helps with the hardness, strength at high temperatures, and creep strength. It even boosts corrosion resistance.

Chromium, 15%: Yes, it’s stainless steel. That means no issues with corrosion for the most part.

Vanadium, 0.2%: This boosts shock loading resistance and toughness against fractures. You don’t want too much vanadium, though, as that can lead to brittleness.

Cobalt, 1.5%: This also enhances the hardness.

Compared to other stainless-steel types, VG10 steel is quite hard. That’s what you get when you have up to 1% carbon in the mix. That means your knife can cut very easily, and you won’t have to sharpen the knife too often.

Actually, when the Japanese steel makers started with VG-1 steel, they made it a bit softer. It’s still quite hard though, so you can get up to a hardness rating of 60 HRC. But it’s not too hard that it’s brittle, so you still end up with a tough knife.

As you may notice from these features, the VG10 steel is actually a terrific all-around steel. It’s good at most things, and it doesn’t have a major weakness.

Like many of the high-end steels, the VG10 steel offers a terrific hardness level. That means it’s able to cut through stuff easily, and the edge won’t dull too soon. None of the upper-midrange and lower-tier steels are able to match its edge retention.

This is the feature that makes it a favorite among professional-grade kitchen knives. Not only does it slice through food stuff easily, but it won’t just rust on you. The chromium level sees to that.

That doesn’t mean that it will never rust, though. It’s more susceptible to pit corrosion than softer steels. That means you shouldn’t leave your VG10 steel knives in the sink or dishwasher.

The good news is that you often find the VG10 steel knives with the VG10 steel laminated between 2 layers of stainless steel. That boosts the corrosion resistance even more.

With VG10 steel, you get hard steel that’s not too hard at all. The steel makers made it that way intentionally, since they made the original VG-1 steel softer. The somewhat softer steel also gives you more toughness, meaning the steel is less prone to chip off with normal use.

This is also another consequence of the “just right” level of hardness. It’s not really all that hard to sharpen the VG10 steel. A few strokes across a good sharpening stone can do the trick.

Just keep in mind that you can really get a wicked edge with VG10 steel. You may not want to test its sharpness by running your finger across the naked edge.

So, how good is VG10 steel compared to other steels? Check out how it compares with other somewhat similar steels in the industry.

While VG10 steel is a high-end steel, the S30V steel is part of the higher-tier premium steels. That means the S30V steel can get a bit harder, and consequently can retain its edge better.

Both perform about the same when it comes to corrosion resistance. But since the VG10 steel is somewhat softer, it’s slightly easier to sharpen.

Still, both steels can be found in the pricier kitchen knives. In fact, the S30V knives may be more expensive in general.

The CTS BD1N is just the BD1, but with nitrogen replacing the vanadium in the recipe. It offers very good corrosion along with good edge retention. But the VG10 steel does better with these 2 factors. The 2 steels are both equal when it comes to ease of sharpening.

Like VG10 steel, the D2 steel is also part of the high-end steels. The D2 is much harder, so it’s clearly better at keeping its sharp edge. But on the flip-side, it’s more difficult to sharpen. In fact, you better be an expert at sharpening to deal with a dull D2 blade.

Also, the D2 steel is only “semi-stainless” steel. It’s also not quite as tough as VG10 steel.

The S35VN is a premium steel, and it’s actually an improved version of the S30V. The S30VN is slightly better at retaining its sharp edge, but the VG10 steel is somewhat easier to sharpen. Both perform equally at resisting corrosion.

This isn’t really a fair comparison. With the ZDP -189, you’re now into the “ultra-premium” category. This ZDP-189 can reach up to 66 HRC. That means it really is better at edge retention, it’s wickedly difficult to sharpen. It’s really one of the most difficult to sharpen steels in the industry.

It’s also not all that corrosion-resistant either. That’s despite the 20% chromium, because the massive amount of carbon pairs up with the chromium. That leaves you with less “free” chromium to battle corrosion.

Is VG10 steel good for Knives?

The VG10 steel is a good all-around steel, and it performs at least “just right” in virtually all categories. It can get very sharp, and it retains its sharpness for a good long while. When it’s time to sharpen it, it’s easy. It’s also stainless steel, so it’s okay for kitchen duty. It’s nice and tough too, so it won’t chip off easily.

While you can find VG10 steel in EDC knives like the Spyderco Dragonfly 2, it’s really fantastic in kitchen knives. 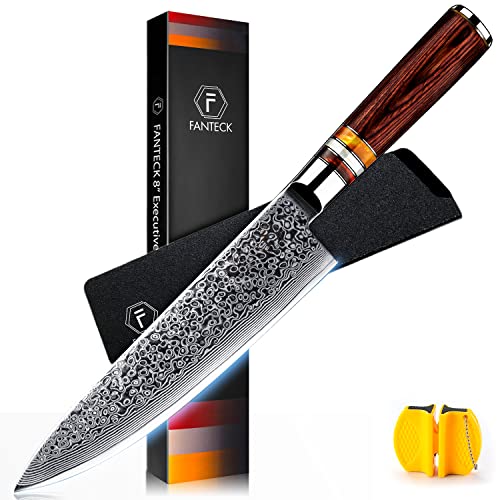 Have you ever found yourself using a Japanese kitchen knife and imagined that you were wielding a magical katana? That’s common when you use this knife, because of the Damascus pattern on the blade. It’s easy to think that everything you do with it is magic.

It doesn’t hurt that, in this case, the hardness level went up to at least 62 HRC. It won’t get dull soon.

The blade itself is about 7.87 inches long and about 1.77 inches wide. It’s been hard sharpened to 10 to 15 degrees on each side. It’s ambidextrous, and you can use it for lots of cutting tasks in the kitchen. The slight curve on the blade gives you that smooth “rocker” up and down motion when slicing and dicing.

Even the handle is terrific. It’s made from pakka wood and features an acrylic rim. It’s ergonomically designed, offering perfect balance and superb grip. 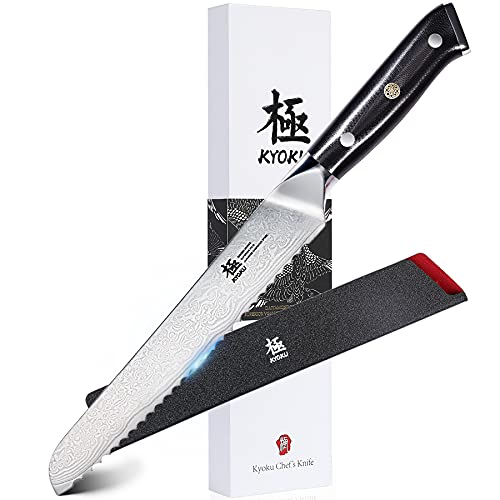 Now if you want a fantastic bread knife, this is it. You even get that fascinating Damascus design on the blade.

The serrated blade is also sharp and strong enough for cutting other items aside from bread. You can use it for fruits as well. You’re basically wielding an 8-inch scalpel with a slightly curved blade, which makes it easier to use.

The G10 handle is also elegant, and it’s impervious to the heat and cold. It doesn’t mind getting wet, either. 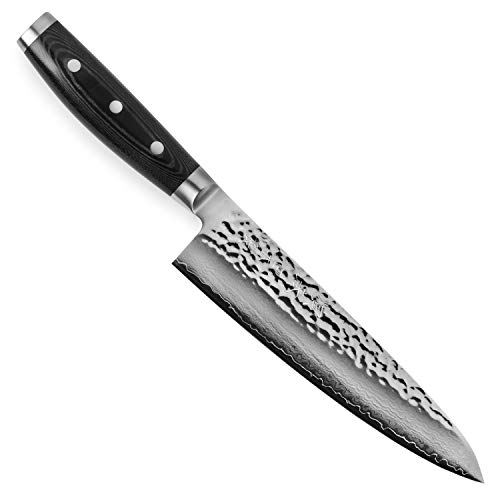 Yes, we have a preference for gorgeous knives, which explains this knife here. It’s a bit pricey as it’s into the 3-digit price range. But then you see the hammered Damascus pattern on the blade and you know it’s worth it.

This is a large knife, as the blade itself is 8 inches long with a width of 1.75 inches at the heel. The handle is 4.75 inches long, and the overall length is 13⅜ inches.

This cuts through anything with its sharp edge and 61 HRC hardness rating. It’s also ambidextrous, and has been ground by hand so you get a 12-degree cutting angle.

How to Sharpen VG10 Steel Knives

The all-around goodness of the VG10 steel means that you can find it in many types of knives. Spyderco was among the first US brands that brought it over, so you can find the steel in lots of EDC and camping knives.

Yet we focused on how it’s used for kitchen knives, since this is the most perfect use for it. It works well in wet conditions. It can get really sharp, and retains its sharpness for a nice long time. Sharpening it won’t be any issue either, and it’s reasonably tough as well.

The VG10 steel may not excel at one thing—but it’s sure good at everything!