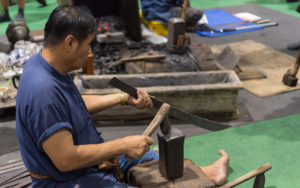 Most people don’t really care about what kind of steel is used for the majority of their household knives. This is one of the reasons why not many people have even heard about AEB L steel. Yet a lot of households all over the world actually have AEB L steel knives.

What is AEB L Steel?

AEB L steel is produced by Bohler Uddeholm under its parent company, Voestalpine, an Austrian company that originally made AEB L steel. This steel is a modification of the company’s earlier product of the same name but without the “L”.

This steel (historical records are unclear) can be traced to its patent in its present composition in late 1960’s. As such, this steel came out through the conventional or traditional steel making.

Despite being conventionally produced, AEB L steel matches or even exceeds other stainless and a few non-stainless steels.

Its use for razor blades is rather popular and common, because of the notable hardness of the steel. That means it doesn’t dull very quickly, so you can use it for several shavings without having to replace the razor blade to quickly.

A much closer look at the various elements used to make AEB L steel can help you figure out its properties. That’s especially true when you know just how of much each element was used to make the steel.

Carbon, 0.67%: It’s the carbon in the steel that makes it hard. In retrospect, this doesn’t really represent a lot of carbon, which may help explain why the steel remains decently tough. A lot of carbon steels come with more carbon.

Chromium, 13.0%: The chromium is famed for helping steel more resistant to corrosion. That’s why stainless steel requires a minimum of 12% chromium. But it also boosts the hardenability of the steel as well.

Sulphur, 0.015%: There’s very little sulfur in the mix, because sulfur in general is considered an impurity that you want removed in steel. Too much of it leads to reduced impact properties.

But just a little (like we do here), and you get enhanced machinability (the steel is easier to work with) and greater impact toughness.

Phosphorus, 0.025%: This is another impurity that can lead to brittleness with too much phosphorus. But when you just have a tiny bit, it enhances the machinability of the steel, the tensile strength, and even the corrosion resistance.

Manganese, 0.6%: Some experts consider manganese the 2nd most important component in steel, right after carbon. It boosts the hardenability of the steel and increases its tensile strength

Silicon, 0.4%: This also boosts hardness and strength (though not as much as manganese does).

The AEB L steel is very hard, so that it works for many blades. The hardness rating usually sets at about 61-62 HRC, but it can reach up to 65 HRC depending on the treatment.

With this hardness, you’re able to get a lot of cutting tasks done much more easily. The hardness leads to many benefits, like wear resistance. Hard blades tend to last longer, especially if you take care of them properly.

With the knife industry in mind, we settle on five properties that is essential for the production-line or custom knife maker. These are: Hardness, Toughness, Corrosion Resistance, Edge Retention, and Ease of Sharpening.

The AEB L steel is very hard, so that it works for many blades. With this hardness, you’re able to get a lot of cutting tasks done much more easily. The hardness leads to many benefits, like wear resistance. Hard blades tend to last longer, especially if you take care of them properly.

Toughness is actually different from hardness. Toughness in steel blades demonstrates the steel’s ability to resist chipping. Actually, the main problem with very hard blades is that they tend to chip more easily.

Which is why it’s really surprising that the AEB L steel offers decent toughness, in spite of the very hard steel.

For a steel to be classified as stainless, it must contain a minimum of 12% Chromium; this steel has 13%. Technically, this makes AEB L steel a stainless steel, so you’re able to use it in wet conditions. This makes the blade effective for kitchen work, along with outdoor activities like hunting or camping.

For this property, AEB L steel is among the best owing to the presence of chromium carbides. The edge retention is also a side effect of having such a hard blade. It doesn’t dull very easily, so you won’t have to sharpen your knives or replace your razor blades too frequently.

This is another notable property of the AEB L steel. Even a simple stropping can get you back that sharp edge. 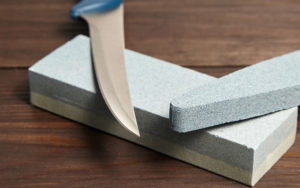 A plethora of steel is available for knife makers, from those made from the past to modern steels by powder metallurgy. It is only logical to know what end-purpose the steel will be as knife: long, short, thick, thin, stainless or not.

With the knowledge that this was initially made at least fifty years ago – to play safe with the age – you would think this will not stand a chance against the newer, scientific steel. Fairy tales do come true; I won’t say but others did.

CPM 3V is produced by Crucible Industries of the USA. This has a rating of 5 in both Corrosion Resistance and Ease of Sharpening; 7 in Edge Retention and perfect in Toughness.

For the reason that it was median in two properties, AEB L steel might come out very slightly ahead. Though there is no head-on comparison between the two, the eventual use would determine the usefulness of the steel.

AEB L steel then, from the data, should shine brighter but then again, like CPM 3V, there is no comparison done.

This match up, if I may say so, is documented by a well-known metallurgist. It not only cites the four properties stated above but also a little bit more. You would have the impression they were quite surprised at the unexpected result of the test.

Both steels are products of the same company, Bohler. With almost three times the Carbon content and five percent more Chromium, Elmax is a premium steel.

By the numbers of their composition, AEB steel should bow down to Elmax. However, the viability of a steel comes into play on how it is to be used. 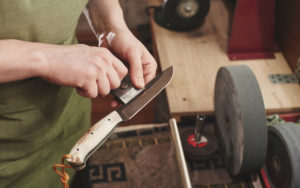 With a positive review from a known metallurgist combined with the advantages of K2 chromium carbide, AEB L steel should be good for knives. As tested and verified by knife makers and users alike, it is comparable with, and sometimes better than a few, existing steels being utilized as knife blades.

In reality, it is currently in use by custom-made knife makers with promising results. AEB L steel definitely could not attain its reputation by word of mouth only but, most importantly, its performance.

How to Sharpen AEBL Steel Knives

The manufacturer of AEB L steel, Bohler Uddeholm, claims it was patented in 1928. A researcher, however, says it is not so because the 1928 patent has a very different composition, though of the same name. Whatever the case, this is old technology.

The manufacture of steel by traditional technology would make the life of a steel maker irritable, to say the least; stagnation, purification, the terrible heat and what not. It was not so for AEB L steel, however; it was a marvel, at the outset, that is.

Without getting too technical, the minds in Bohler created a steel with K2 chromium carbide that make its properties even excel that of a few powder metallurgy modern steels. Initially made as a blade for razors, it has found its way into the knife industry today.

Knives with AEB L steel do not come expensive, made even as chef knife, pen and survival implement, you will swoon over this knife blade.