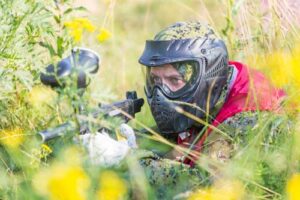 Planning on giving paintball a try? Before you head out to a paintball field in your area, it would be ideal to learn the basics about this fun outdoor sport first.

There’s so much to paintball than just shooting paint at each other, so some quick backgrounder would come in handy for most folks.

One of the most important topics about the sport is the types of games you can enjoy.

Woodsball and Speedball are two of the most popular kinds of gameplay in paintball. They have different structures, rules, and formats, so there’s a very good chance that some might prefer one over the other.

To help you determine which one you’d like to try out, allow us to discuss in detail the differences of these two types of paintball games. 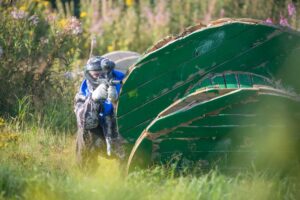 Woodsball is considered as the fist format used to play paintball. It got its name from the location where it’s usually played in: the woods. It’s best characterized as paintball matches held in wooded or any natural outdoor areas.

This format is somewhat similar to the military simulation gameplay used in airsoft. However, it’s not exactly the same. In fact, the term ‘woodsball’ is often used to describe a non-milsim format of airsoft wars.

What makes woodsball so fun is that it’s very flexible. It can be classified as a form of or in conjunction with scenario paintball. Players can adopt whichever theme they’d like, may it be some role-playing, historical reenactment, or even military simulation. Some don’t have themes, however, and that’s fine.

Others add more complex scenarios into their game play like medics and snipers. Strategic gameplays are also employed in many events and can allow more equipment other than paintball markers.

The size of woodsball games are also very notable. These games are often held in large outdoor areas so it can involve lots of players. As the size of the playing field and the number of players can affect the length of the game, it can also run long.

For example, there have been woodsball events with turnouts that racked up more than 2000 players while others can draw in up to 5000 players. 24-hour and other long-running events are also quite common, so if you’re up to a thrilling weekend, you can definitely spend it playing woodsball.

However, it can also be played on a small scale. Some tournament leagues actually only require teams of 5, so it’s also possible to enjoy this game with a group of friends or colleagues.

Woodsball can also be enjoyed in either amateur or professional capacity. Different leagues organize events regularly but the largest ones in the USA right now are the Woodsball Tournament League (WTL) and the Ultimate Woodsball League (UWL).

While woodsball is very flexible, there are still a few popular ways to play a match. However, lots of folks opt to employ the following variants:

For woodsball events, you’ll only really need the standard set of equipment to play. This list includes:

However, depending on the theme or game style that will be employed, players can also use military items like a camouflage suit, combat boots, or even a ghillie suit. All of these can come in handy if you want to blend in better into the background so you’ll be harder to spot by the members of the opposing team.

Markers for woodsball can also be customized to let the player carry out his tasks better. Your style of play or position in your team can allow you to add or use other equipment. If you’re a sniper, for example, then you can add a more accurate barrel and a telescopic sight to your marker.

If you’re designated to be the contact person, you might also be allowed to carry a radio or a two-way radio. Some also introduce hand grenades and paint mines among other kinds of alternative weaponry.

A quick look at the available items in the market right now will also allow you to find paintball equipment that are specifically designed for paintball. They’re usually designed to better withstand the harsh conditions of the outdoors. If you’d prefer such items, you can also definitely get some. 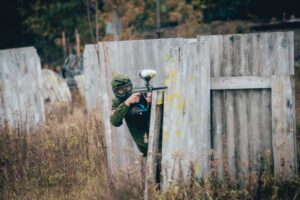 Speedball paintball matches, on the other hand, is the form of paintball that lots of us know through team-building events. Unlike woodsball, such games can be played in smaller, flat, and open areas.

It’s also the more popular format of paintball since there are national-level tournaments (like the NXL) as well as professional teams and televised events for the sport. It can still be played recreationally, however.

Speedball employs a more structured and straightforward kind of gameplay. Its rules are better established so it’s very easy to tell apart from woodsball. The key characteristic of this type of paintball match, however, is the setup of its playing field.

Unlike woodsball, speedball is played in flat, open areas. It doesn’t require natural obstacles and challenging terrains. In fact, it’s possible to whip up a makeshift speedball field as long as you have an open space that is at least 20,000 square feet in size.

Instead of trees, natural foliage, or buildings, the obstacles in speedball are made up of inflatables. They’re called ‘bunkers’ and are available in several designs, created to provide various kinds of shelters and challenges to players. However, since the game itself isn’t about concealment, these bunkers aren’t the most important elements of the game.

The rules of speedball are rather simple. There are two competing teams that can be composed of different numbers of members, depending on the size of the field they’re playing in. Games with teams of three, five, seven, and ten are the most common.

As the name suggests, speedball is about speed. Games have time limits wherein teams are supposed to complete a goal. These goals often involve securing flags, whether it be a neutral flag or the flags of the opposing team – it depends on the league and tournament.

Some games, however, also have point systems. This makes speedball more challenging and exciting. There are different ways to earn points and various tournaments and leagues have their own point systems. However, the most common ones also include the following:

More than anything, however, speedball is all about teamwork. In order for a team to win, each member has to look out for each other. Providing cover to your teammate is essential if you want to survive or accumulate lots of points to be hailed victors. Stealth also contributes a lot in speedball games. 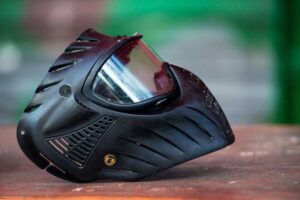 You don’t really need a lot of stuff to play speedball. However, the equipment for this kind of paintball game can be a bit more specific so you should still pay attention to the requirements. Here are some that you should take note of:

Woodsball vs Speedball: Which One Should You Play?

Choosing between woodsball and speedball is definitely up to you. Some folks can enjoy one better than the other depending on their preferences and personalities. Make sure to take a close look at what these two kinds of gameplays offer so you can decide for yourself which one suits your playing style best.