A BB gun shoots a projectile, usually a small metal or plastic ball, by using a propellant like compressed gas. Typically, BB guns use the power of compressed gas from a cartridge or a plunger system that compresses air with a spring before releasing it to propel the projectile. The main difference between a BB gun and a firearm is that firearms use a small explosion provided by gunpowder, smokeless powder, or other similar material to send a projectile through the air.

Sending a small piece of metal or plastic through the air to hit a target seems an easy task. But something that seems as simple as a BB gun is actually a complex little machine that can work effectively and reliably, with a little maintenance of course. Asking how do BB guns work is actually the first step in choosing the right BB gun for yourself and your family.

How Does a BB Gun Work?

In the simplest form, BB guns are three things. A source of propellant, a tube that directs the projectile, and a frame and mechanism to release that propellant in a way that accelerates the projectile to the desired speed.

The first thing to look at is the propellant. In a BB gun, each shot will be powered by a burst of air that has been compressed to the desired pressure. BB guns that utilize spring pistons to provide this compressed air will affect the atmosphere for the source. Pneumatic type BB guns will be powered by compressed air stored in the gun, while a Compressed gas type will have a detachable reservoir like a tank or small cylinders.

The most command beginner type of BB guns will often be pneumatic as they can be less expensive to own and run with minimal additional equipment or expertise required.

Spring piston BB guns are the most basic and common type of BB gun on the market today. In this type of gun, the user will compress a spring, and the power released from this spring will in turn move a piston filled with air to push the BB to its target. You will need to manually cock the spring every time you shoot a gun. But, do not fret as modern spring-piston BB guns often have great designs that make use of proper leverage so that it is not too difficult to do.

Most of the BB guns that use this kind of system are breech loading, meaning you fire one shot, then reload before firing another. However, there are some companies that created magazine-fed BB guns that allow for smoother operation between shots. One mostly desirable effect of heavy spring power on some BB guns is that there is a perceivable recoil effect on the shooter, created by the spring pushing on the piston. Compensating for this effect is one of the great skills BB gun shooters learn to improve accuracy and precision.

Break-barrel, underlever, side lever, and over lever style cocking mechanisms are commonplace among spring-piston BB guns. Each style has its own mechanical and aesthetic effect and it is up to you to decide which one suits you best.

You will often find two types of pneumatic BB guns on the market today: pump and pre-charged. Pump is exactly as it says in the name, you have to pump it up to compress air into the gun before firing. Some of these work with a single pump, while others can store more energy but require several pumps to fill up its reservoir.

Pre-charged pneumatic BB guns store air from a source like a compressor, pump, or even a gas cylinder. Each charging cycle can often power multiple shots, depending on the size of the reservoir of the BB gun you are using. This is the type used in many sporting events from international competitions like the world cup and the olympics, to local field target competitions you can find across the country.

Advantages of Pump BB guns include: 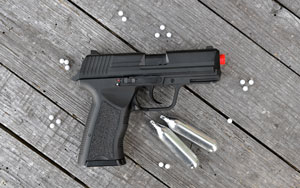 The final type of BB gun you can choose to purchase is a compressed gas gun. Although both spring piston and pneumatic BB guns also use air compression to power each shot, compressed gas is different because it does not have its own way of creating or storing the compressed air. Instead, it uses some kind of pressure reservoir that can be detached.

The most common compressed gas cylinder used in BB guns are small bottled liquid carbon dioxide cartridges. These are small enough to fit in most gun grips and deliver enough gas for a lot of shots. Some cartridge-type BB guns also have a so-called gas blowback effect, that mimics the recoil of firearms. This makes compressed gas BB guns an effective training tool. If you want to train for accuracy in firearms, getting a similar BB gun will be a less expensive and unrestricted way to train.

Cleaning and Maintaining your BB gun

While the barrels are simple to clean and maintain, just keep it clear and clean with the included barrel cleaning kit and cloth. The rest of the BB gun is often too complex for a beginner to do a deep clean on but the instruction manual will often indicate parts of the gun to lubricate regularly after each session of use, or before storage.

One great way to keep your BB gun in good shape is to always clean it before storing it. Why? You ask. This is to prevent any corrosion to build up and seize components that are supposed to move fluidly during use. Moisture and dirt, combined with time in storage can be disastrous to your BB gun, so cleaning it up after use will help a lot.

BB guns are intended to be simple to own and operate but figuring out exactly how the work can be difficult as you look into more complex and sophisticated products. However, knowing the basic principles behind each type of BB gun will help you assess which one is right for you.

Recommended Readings:
What to Bring to Your First Airsoft GameHow to Convince Your Parents to Let You Play AirsoftWhat is GBB Airsoft? What You Need to Know about Gas-Powered Airsoft GunsWhat are top tips for first time Airsofters?Can I Use Airsoft Optics for a Real Gun? Substitution Tips to Keep in Mind