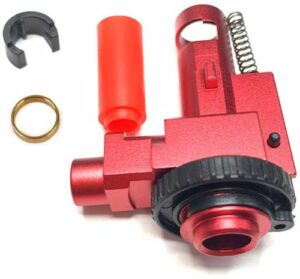 This post covers some of the fundamentals of a hop-up airsoft. So if you are looking forward to knowing more about hop-up airsoft, this post will be of significance to you.

The hop-up bucking helps in nudging the BB top, which then creates a backspin, thus improving the range of your airsoft gun. In other words, it “springs” the pellet to minimize the chances of the BB flying way too up or falling.

Additionally, there’s rubber at the beginning of the barrel. This rubber has specific cutouts that help with accommodating the nub, as well as the bucking.

This is where things become a little bit technical. Well, you probably know that spin will prompt the ball to move, but how exactly does that happen?

The spin of an object is called the Magnus effect. While this phenomenon seems complicated to most people, it’s quite simple to understand. So let’s see how this works.

For example, glasses and fluids have an abrasion, and this is what explains the reason why water holds onto vertical surfaces. That’s the same with the air surrounding the BB – the air wanting to cling onto the BB as it runs through the surface.

Now, if you fire the BB before turning on the hop-up, the air will be distributed across the BB surface. The gun will then propel the BB forward while the gravity pulls it down. The air that passes through the BB will slip behind to feel the space left.

But when you backspin, you introduce an effect known as the Magnus effect. Spinning brings about a difference in the speeds between the BB top and bottom.

It is also essential to note that the BB top spins with the air, thus less friction. On the contrary, the BB bottom spins against the air, which means more friction.

Therefore, the air at the BB top moves faster and with more energy to fill the low-pressure area behind the BB to overtake the air below.

In a nutshell, each of these reactions has an opposite and equal effect. So if you throw the air downward, the BB moves upwards producing lift.

How Can I Adjust My Hop-Up?

There are many hop-ups with different designs brought to light to offer users with adjustment and construction options. The most affordable Electric Airsoft Rifles come with a standard hop-up which allows users to tune the hop moving onto the BB.

But you can still find better hop-up systems that will allow you to tune your hop much better. This hop-up system comes with an adjustment wheel with a higher diameter to enhance more turning, thus allowing for better precision.

If you want to set up your replica for an optimum range, there’s only one way out. First, find any safe opening that can allow you to test the rifle. If you like, you can take the test to an airsoft game field.

Finally, it’s recommended that you fire between 10 to 20 rounds to rehearse the hop rubber. Also, your BB path must be straight. If you adjust your BB the right way, it should drop after hopping.

There are differences between different hop-ups – from the softness to the thickness of the rubber. A soft rubber material will enhance better traction as well as a robust effect on the BB.

Alternatively, you can select a more robust version, which will have prolonged durability. That said, below is a summary of what you should expect of hop-ups in terms of their degrees:

Another consideration you should have is the temperature reaction of a hop-up. The thickness will dictate whether they will or will not freeze during cold weather.

However, softer ones will be quick to warm up during friction. This is because some companies incorporate materials that tend to do well even in cold weather. That means that you will not select lower degrees to curb weather issues.

One last thing. Before you purchase anything, it is essential that you thoroughly check to be sure that the models are compatible with the product descriptions. For example, there are the “Sniper and Pistol” and “AEG.” Make sure that you are purchasing the right thing – not a sniper for M4.

How Do I Calibrate the Hop-Up?

Often, the hop-up design primarily depends on friction. As such, you need to store it in a cool, dry place that’s free from any lubricants that can enter the barrel.

If you’ve handled a hop-up before then, you should love the experience. The most exciting part is how the path of your shots is affected by the hop-up.

Even so, the secret to optimizing your gun’s settings is by tuning the hop-up just a little so it can remunerate for the earth’s gravity instead of applying a significant amount of backspin.

For the most part, this technique will help you attain the exact trajectories, rather than lifting off the shots before they can hit the target.

How Do I Fine-Tune the Hop-Up?

Before you test your gun, you need to be sure that you are in a safe and private environment and that you are wearing an eye-pro.

Sure, systems and location involved when fine-tuning a hop-up system will vary, depending on different types of guns. All the same, this process is done by turning the cog.

So if you want to reset your hop-up, be sure that the cog is turned to the left. It’s recommended that you carry out this process before calibrating your weapon.

Once that is done, you can fire some shots while slightly turning your hop-up cog. Be careful to study when you take the shots because you’d want to know how accurate your setting is.

Do I Need a Hop-Up Airsoft?

Having discussed what a hop-up is, and how it works, hop-up airsoft is a must-have.

Because airsoft guns use spherical ammunition, which is tied into the barrel, attaining consistent trajectories can be downright frustrating.

Even so, the hop-up mechanism comes in handy to help you achieve the exact trajectories.

So yes, you need a hop-up airsoft.

Where is the hop up on an airsoft gun?

Hop-up refers to when someone spins an airsoft BB to enhance accuracy in what’s known as the Magnus effect. Additionally, hop-up could also mean a device that aids with the creation of backspins of the BB.

What is a bucking in airsoft?

A bucking is a rubber or silicon that is also part of the hop-up and should fit within the barrel. The spacer is responsible for putting pressure on the bucking, which brings about the rubbing on the BBs while passing through the barrel, thus adding a backspin.

What hop up bucking should I use?

It’s your choice here. You can choose to go for a soft hop, which will give you a stronger effect or you can decide to go with a more robust version to meet your durability demands. Medium should fall in the range of 65 to 75 degrees while hard falls in the range of 75 and 80 degrees.

Does hop up affect accuracy?

Sure, a hop-up will affect the accuracy, and I’ll explain. Now, a hop-up is responsible for the backspining of the BB while coming out through the barrel. It spins against the force of gravity, which will result in a better accuracy, long range and a flat trajectory.

What FPS is allowed in airsoft?

Twenty grams is recommended and standard to use. Now, most lower-end airsoft rifles can fire up to 200 FPS while the high-end ones will go up to 400 FPS.

The first thing you need to understand is that FPS doesn’t equate to the range. However, FPS will affect the range.

Contrary to what most people think, a heavy bb will not increase the FPS, but will instead decrease the range. This will only happen if your FPS isn’t good enough or lacks a hop-up to give it support. Therefore, if you have a good FPS, your range should increase.

What does adjusting hop-up do?

Why do my Airsoft BBs curve up?

There are several reasons why your airsoft BBs tend to curve up, left, right, etc. For example, the curve could be as a result of the dirt in your barrel. Your airsoft BBs could curve up in some cases because your hop-up bucking or nubs are not in position. Finally, this incidence could also be due to the poor quality of the BB or damage in the barrel.

What is a hop-up nub?

The hop-up nub is the part that aids in the pressing of the bucking to initiate a backspin. The hop-up nub is also very essential because it helps with compression when the BB is passing through.

Can you put metal BBs in an airsoft gun?

The short answer is NO. You can’t put metal BBs in an airsoft gun. This is because metal BB projectiles can’t fit in an airsoft rifle. It doesn’t matter whether you have a smaller size. Still, metal can damage your barrel with time.

Does the airsoft battery affect FPS?

No, airsoft battery won’t affect the FPS. Now, airsoft batteries come in voltages ranging from 7.2v to 12.8v. Higher voltages will enhance the excellent flow of electric current, which will increase the trigger response.