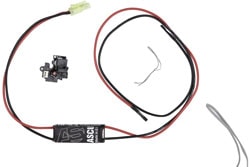 When you’ve done some online research on airsoft and encountered the term Mosfet rifle, it naturally leads to an obvious question: What is a mosfet airsoft rifle, and what makes it different?

That question isn’t as simple as it seems, and it can’t be answered in 5 words or less.

The good news is that it’s not overly complicated either, though the answer does involve a bit of explaining.

Meaning of the Term “MOSFET”

MOSFET is actually an acronym, which is why some people insist on using all-caps.

It stands for Metal-Oxide-Semiconductor Field-Effect Transistor.

Of course, for most of us that definition isn’t exactly illuminating.

What it really means is that a mosfet is a type of transistor that switches the electronic signals and power to a device.

How does a MOSFET work?

Here’s a simplified version of the answer.

Let’s say you apply voltage at 1 point in a device. However, you don’t have current flowing through that particular point where you applied the voltage.

Instead, the current flows through 2 other different points.

What does MOSFET got to do with an airsoft rifle?

Mosfets weren’t all that common when just about every airsoft rifle used your everyday NiMH battery.

That changed when more people began using more powerful batteries such as Lithium-Polymer batteries. After all, that’s a very easy and simple way to upgrade any airsoft weapon.

However, using a more powerful battery comes with a new set of problems, and these are the problems that a mosfet transistor solves.

What kind of problems come with more powerful airsoft batteries? 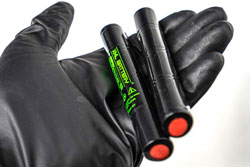 Why is electrical arcing a bad thing in an AEG?

One problem here is that the electrical current that jumps the gap ionizes the air between the trigger contact. That leads to a very high temperature that may very well melt and destroy parts of your AEG.

So why is MOSFET important?

Mosfet solves the problem that comes with using more powerful batteries for your AEG.

Technically, the mosfet is just a single part of a circuit board. However, lots of people in the airsoft community regard any circuit board with mosfet functions as a “mosfet”.

There are several types you may encounter:

This type only has a single task, and that’s to protect your trigger contacts. These regular mosfets are so basic that some airsoft vets just build their own mosfets for a lark.

But they’re affordable enough at $30 (at the most). They’re small, and they work reliably.

This type can be a bit misleading. Supposedly, you can just plug in this mosfet between the battery and the existing AEG wiring and you’re done. You don’t have to do any rewiring.

But most of the time, this just offers special features such as burst fire. Without any rewiring, the electrical current from the battery still goes through the trigger contacts.

However, some of these “plug and play” mosfets do offer an option for rewiring.

These let you add customizable functions for your airsoft rifle. You’re able to control how the electrical current goes to your gearbox. This is great for premium builds, but you’re able to set up your AEG the way you want it.

With these mosfets, you replace the moving trigger contacts with optical sensors or microswitches. This causes the trigger feel to be shorter and lighter. You may even be able to use Bluetooth to change the settings.

When is a mosfet not for you?

Here are some things that may indicate that you don’t really want a mosfet:

When is a mosfet needed?

You should install a mosfet in your AEG if:

Basically, if you’re a newbie with an entry-level AEG, then you don’t really need a mosfet for that airsoft gun. You’re going to eventually replace it anyway.

But if you want to upgrade an AEG you want to keep, then mosfets are definitely a good idea!