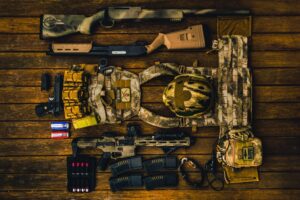 Airsoft guns are a duplicate of weapons used in warfare. They have low penetrating power and stopping power, which makes them usable in several sporting sports like paintball while wearing protective gear.

Its bullets are made from plastics or other non-metallic materials to avoid any fatalities. Airsoft guns are available as pistols, rifles, submachine guns, grenades, landmines, assault rifles, etc.

Airsoft guns have huge usability in the filming industry. They are made of plastic or resin materials and have the same resemblance to originals. There is an orange cap attached to the barrel’s top to differentiate between original and copy.

What is Blowback (BB) technology?

Blowback (BB) technology is like an auto-loading technique. This system gets its primary energy from the cartridge case, which gets pushed back by the gases released during the barrel’s firing mechanisms operation.

In standard conditions, these are less sound creating weapons, but without pointing at someone as without protective gear, they can also cause serious injuries. There are two types of blowback guns:

To understand the Blowback procedure through visual means, refer to the video link below

Unlike in EBB, GBBs have less firing rate, as compressed gas release cools down the system’s temperature and needs time to reach the optimum temperature.

Continuous shooting is possible, but as a result, it will decrease efficiency. Gas-powered is preferred over electric powered guns because the adjustment of velocities is more effortless.

The military uses such guns in training procedures for warlike scenarios. Here wax bullets are used to mark the impact areas for the observations. The less damaging factor has made it suitable for local authorities to handle situations like unrest and others.

Companies are now shifting away from producing exact replicas just for the ease of recognizing the original weapon. In the past, there have been accidents in which airsoft guns were identified as real ones and ending in various fatal accidents.