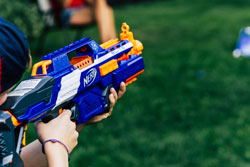 Without a doubt, competitive shooting sports can easily get one’s adrenaline pumping. Since these activities will let you shoot at others with relative safety and execute tactical techniques, it’s the very definition of fun for many.

If you want to give it a try, too, choosing the right activity is an important first step. By taking a closer look between airsoft vs nerf, however, you might be able to get this first hurdle over with.

Airsoft Vs. Nerf: The Basics

Airsoft at its most basic is a shooting sport where people play against each other to hit each other with small spherical plastic projectiles that travel at high speed. Airguns are used as weapons but unlike in paintball, these pellets leave no color marking. An honesty or honor system is the basis for hits instead. It is up to the players to declare if they were hit.

Nerf, on the other hand, uses toy guns or ‘blasters’ of the same name, made by Hasbro. These toys use larger foam projectiles with plastic tips referred to as darts. Due to the larger size of their ammunition and the fact that the weapons are classified as toys, the projectiles they shoot travel at a significantly lower speed compared to airsoft’s pellets. Nerf blasters are easier to get hold of, though, since they’re available in most toy stores.

What are the Rules? 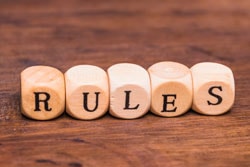 As both are classified as competitive shooting sports, their rules are basically the same. Teams are meant to try to eliminate members of an opposing team by hitting them with projectiles. Once one player is hit by a member of the opposing team, they’re automatically out of the game.

There are different types of games played in airsoft and Nerf, however. Most of them involve role-playing but at its core, this is the main mode of play for most events. Here is a funny example of rules used and enforced by a group of airsoft players.

In terms of structure and team membership, Nerf wars and airsoft matches can be composed of groups of families, friends, colleagues, and even strangers during organized events. Depending on the organizer, however, certain rules may or may not apply. 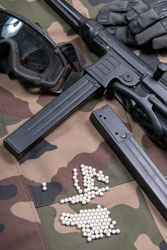 As mentioned above, Nerf blasters are easy to find and are quite affordable due to the fact that they are toys. However, depending on who organizes the nerf event you will be joining, many might allow modified blasters on the field.

These blasters are beefed up Nerf blasters to increase their power exponentially. If you show up with a “stock” or an  unmodified blaster, you will simply be outgunned. Modifying your own Nerf blaster is often enjoyed as part of the hobby and many enthusiasts create blasters that could be based on existing blaster designs, or their own unique creations.

Certain events will not allow modified Nerf blasters, however. So if you want to make sure that you’ll still be able to join the skirmishes, it would be best to have a couple of weapons on hand.

On the airsoft side, primarily you will need an airsoft gun. You will be able to find equipment for rent or sale on most sites, however. Although these are basic airsoft guns, you’ll still be able to play with no problem.

If you are looking to get your own equipment, though, things can get real expensive, real fast. Better quality airsoft guns can get quite pricey and most of the attachments have the same cost as what they use with real firearms. If you think you’ll be enjoying the sport for a long time, however, investing on your equipment would be a wise idea.

Finally, both sports will require you to have a minimum amount of safety gear. The most important out of everything is eye protection. This is because your eyes can be easily damaged by even the slowest projectile used in these shooting sports. Additional protection for the face is also ideal so that you won’t have lingering marks from hits on the face.

Wearing thicker clothes is also recommended. Doing this will reduce marks or welts from hits to the body. Appropriate footwear for the playing field is also necessary as they will help keep you from accidentally falling down in slippery areas. 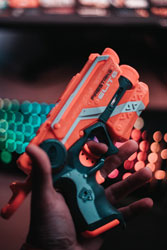 The most obvious difference between the two shooting sports are the projectiles they use. In Nerf wars, the projectiles in use are either the original Nerf darts sold by Hasbro or similar items, fashioned from the original items. These darts are made of soft foam with a plastic leading tip. The darts are about 2.89” long and weigh somewhere around 1 to 1.1 grams.

Recently more playing groups also accept the use of Nerf Rival ammunition called by Hasbro as High-Impact Rounds or HIRs. These are small round dimpled foam projectiles that are around an inch in diameter.

Airsoft, on the other hand, uses small 6mm plastic pellets of different masses. These plastic pellets are a lot harder than their Nerf counterparts and if used in a powerful enough airsoft gun, can break the skin.

Both sports have communities that allow for choosing between different kinds of special or modified ammunition. As shown here, there are a lot of Nerf darts available on the market. With the addition of high impact rounds and ultra rounds, Nerf wars can be filled by many different types and sizes of projectiles.

Airsoft pellets, on the other hand, are available in various sizes. While you can’t use metal pellets on airguns, there are metallic pellets that are harder and heavier than conventional plastic ones. Most airsoft fields prohibit their use as they’re more likely to cause injuries.

When it comes to simulating the conditions of a real battlefield, airsoft is truly the way to go. Although you can modify a Nerf blaster to look like a real steel weapon, it is an extremely difficult process that not all Nerf players are willing to give it a go.

So, most of the time, Nerf wars are played with blasters that are quite obviously toys. Airsoft guns, on the other hand, look like the weapons carried by law enforcement and military organizations around the world. As a result, airguns are easier to incorporate in events that focus on realism. Events like Berget with hundred or even thousands of participants in military simulations are quite common.

With all of this, there is still a lot of fun to be had whichever competitive shooting sport you choose. If you want to play a casual game with low safety requirements, Nerf is the best option. But, if you want to suit up and play in an all out wargaming scenario, airsoft is the true choice. Just remember to play fair, and remember, safety first!