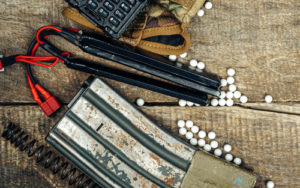 To put batteries in an airsoft gun, follow these steps:

With airsoft AEGs or Automatic Electric Guns being the most common types of airsoft guns available and used today, there’s a high chance that many newbies in the sport will get one. Among the most basic things users need to know about is how to put batteries in an airsoft gun.

As mundane as the task may sound, it would be ideal to pay close attention to this detail as it can also make or break the experience in the use and operation of the main component of airsoft games. If you also want to make sure that you’ll handle your airsoft rifle properly, this guide can be of great help to you.

Before going into the details of the process of installing batteries in an airsoft gun, let’s first take a look at the materials needed to get started. There’s not a lot of items required for this procedure but it’s still best to have everything on hand before going at it so the process won’t be impeded or interrupted by the need to grab a specific implement or object.

Here are the items that you’ll most likely need to put in batteries in an airsoft gun:

Many airsoft rifles actually do not need any tools for this process but having a couple of things on hand could still be very helpful if you want to be more thorough in doing it for the first time.

Step by Step Guide on Putting Batteries in an Airsoft Gun

Now that you’re ready to install your battery, here are the steps to go about it.

Most airsoft guns come with a user manual that will include all of the information you’ll need about your unit. It’s always a must to read this before doing anything with your rifle so as to avoid mishandling your new rifle. It will also have details on the manufacturer’s recommendations on battery installation so it’s vital that you read it before trying anything.

In most airsoft AEGs, the battery compartment is located in the buttstock of the rifle. However, others may have theirs on the underside of the handguard so there might be slightly different instructions for rifles with such a design.

No matter where the battery compartment is in an airsoft gun, all of them have locking mechanisms that don’t usually require tools to work with. This is essential as one might need to change batteries in the middle of a game. A tool can be a hindrance in such occasions.

Applying ample pressure or moving certain parts can already engage the locking mechanisms and cause the covers to pop out of place. Carefully take them out.

Take out the attachments, if there are any

Depending on the design of the airsoft rifle, there may be some attachments in the battery compartment that are meant to help hold the batteries in place. Take them out at this step.

Sliding the battery in place is pretty simple but it will still require some skill and a good amount of care to avoid damaging the wires of the battery. The procedure of installation will depend on the design of your rifle’s battery compartment.

It’s easiest for those with the handguard design as it’s as simple as placing the battery flush against the underside of the barrel. It’s best to flip the rifle with the open battery compartment facing up to do this more easily. For these kinds of rifles, attaching the wire connections will need to be done first before putting the battery in place.

For rifles with the battery compartments in the stock area, the battery will need to be slid inside the stock. If you have one with dedicated slots for the batteries, just slide the battery in with the end that has the connecting wire first but don’t stuff the connector end inside. Make sure that it stays sticking out towards the opening of the compartment.

For units with attachments, slide the attachment into the battery first. There are usually three rings to hold the two batteries and the wire in place when inside the stock, so position them nicely before sliding into the compartment. Again, keep the connector end sticking out of the compartment.

Hook up the connectors

Place the cover back into its place to close the battery compartment.

Put the battery compartment cover back in place. Most of these just need to be slotted in place and will automatically lock when properly placed.

To make sure that you properly put batteries in your airsoft gun, test the rifle after. Make sure you’re in a safe space, however, before firing.

Important Things to Remember About Your Airsoft  Gun’s Battery

Aside from its proper installation, there are a number of other important things to remember when it comes to airsoft gun batteries. Here are a few of the most crucial examples that everyone should keep in mind:

Disconnect the battery when not in use.

Like with other electronics, it’s recommended not to leave the batteries inside your airsoft gun when it’s not going to be used any time soon. If not, power can still be drained from the battery even if the device it’s attached to is not in use as it’s still connected to the circuit.

Batteries tend to corrode when left inside compartments as dissimilar metals and electrolytes are in contact. Combined with oxidation, this creates a corrosive environment leading to a good deal of damage. To avoid having issues in your airsoft gun’s battery compartment, it’s best to try to avoid corrosion by simply removing the batteries when the airsoft gun is not in use.

Most airsoft gun batteries are rechargeable so there’s a need to observe proper measures for their care and maintenance. Manufacturers provide detailed information on this topic so you don’t have to look far and wide to learn what you need to do.

Since it’s necessary to remove the battery from your airsoft gun when it’s not in use, it’s also important to store it properly. Again, battery manufacturers will have their own recommended storage and care instructions for their products so take note of them and make sure to observe them faithfully.

Mostly, this will require storage in a non-flammable container and in a cool and dry place away from direct sunlight. Experts, on the other hand, recommend storing the batteries alongside the airsoft gun so you can find them easily when you’re off to battle.

It might seem daunting at first but as the guide above would tell you, it’s quite simple to put batteries in an airsoft gun. It’s just best to do it properly to ensure that your rifle will work correctly.

Hopefully you’ve learned something and enjoyed our quick tutorial above. If you have any thoughts or opinions on what was shared, don’t hesitate to leave a comment or share the article to help out others as well.