Once you become good enough in airsoft battle simulations, it’s pretty natural to think of turning pro and becoming a rich sports star. But how much do pro airsoft players make?

Maybe you’re thinking about being a millionaire. Plenty of professional athletes make millions of dollars, through salaries, winnings, and even endorsements.

Even sports like chess, bowling, table tennis, and darts have pro leagues.

So why not airsoft?

The fact of the matter is that there’s virtually no money to be made in airsoft as a professional player.

It’s true that there are lots of teams in the world, especially in the US. Team members are chosen after demonstrating their airsoft prowess, and they can train a lot for local tournaments.

There are national and even international tournaments for airsoft teams. These teams are often sponsored by airsoft companies, stores, or local businesses.

Still, the prizes for these events can go for $20,000. That’s not really a lot, since many teams have 10 members or more.

All in all, you can’t match Michael Jordan or Lebron James, who can make up to a billion dollars in their lifetime.

If you’re extremely lucky (as in “hit the lotto jackpot” lucky), you can maybe end up a few thousand dollars richer.

How to Make Money in Airsoft

It’s not all bad news, however. Some people can actually make a decent living from airsoft, or perhaps make enough money to help some of the expenses.

This is perhaps the first step most people take when trying to recover some of their airsoft expenses. Once you’re done with a piece of airsoft equipment like a rifle or a pistol, you can sell it through Facebook and other online platforms.

You can also sell the stuff to various newbies in your neighborhood who wants to get into the fun of airsoft.

If you’re a regular patron who plays in a particular airsoft club a lot of the time, you may want to apply for a position there. Quite a few airsoft players do this, as they can then help out the newbies on what to do.

In return, perhaps they can play for free and get discounts when buying equipment from the airsoft club. There’s the pay as well, though this may well be a part-time job only. 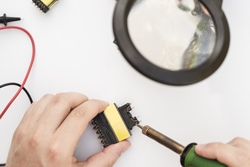 Your services may include repairing airsoft equipment, or helping out with upgrades. Your knowledge when it comes to upgrading can be especially useful, as you can give your customers a truly terrific airsoft weapon that’s much better than most stock airsoft guns.

You can offer to build an airsoft weapon for your client within a specified budget, and that budget can include your professional fee.

Now for the really big bucks, you can open your own airsoft retail store. Inside, you can even offer repair and customization services. Promoting your store also means promoting the sport in your neighborhood. As more people in town gain interest in airsoft, the more potential customers you have.

You can have your own retail store and run your own airsoft club as well. Lots of successful airsoft clubs make money off admissions, along with rental or sales of airsoft equipment.

The most famous airsoft clubs offer military simulator operations, imagining scenarios that pit NATO forces against Russian soldiers, or even terrorists. Some of these “milsim” events cost $200 a ticket, and hundreds of players join in.

Other airsoft clubs offer training facilities for law enforcement, military personnel, and even civilians licensed to carry firearms. It’s much cheaper to train with airsoft equipment. One blank M16 round costs the same as 32 airsoft rounds, according to one military expert.

Right now, you can’t really make a profit from airsoft, even if you’re the best of the baddest players in the world. You can make a few thousand bucks for yourself, and that’s only if you’re really lucky.

But then again, you can console yourself that with all the money you’re spending, you’re having lots of fun. That’s always money well-spent.