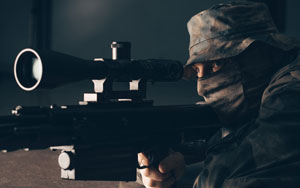 Is it possible to use airsoft optics for a real gun? The answer is both yes and no. Yes because they’re meant to fit airsoft guns that are built as replicas of actual guns so they will most likely fit a real gun.

On the other hand, the answer can also be ‘no’ because airsoft optics are not made with the same materials and construction quality as actual red-dots. Airsoft sights might not be able to withstand the impact an actual gun creates when in use, so it might easily break.

Interested in airsoft accessories? Anyone who’s been enjoying the sport for a while will love to deck out their equipment to make them more functional. However, gun fans might also find airsoft accessories interesting, especially since they’re way more affordable than the ones built for real firearms.

Looking at the prices of airsoft attachments, you might be wondering, can I use airsoft optics for a real gun? How about flashlights or holsters? It’s worth looking into, especially if you’re not ready to splurge on gun accessories just yet.

The answer, however, to the big question isn’t as straightforward as many would like it to be. So let’s talk about it in detail below.

Can I Use Airsoft Optics for a Real Gun? 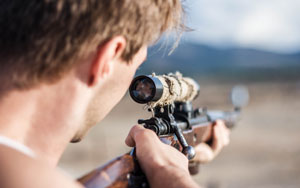 The answer to the question whether you can use airsoft optics, or any other airsoft attachments, on real guns is both yes and no.

Yes, because airsoft scopes will fit real guns so you can certainly attach them on such and use it for the simple purpose of aiming your target. If your airsoft sight is compatible with your firearm, you won’t have issues in terms of fit.

However, there are other considerations, and this is where the ‘no’ comes in. With how widely different airsoft ang real guns are, it should be expected that the use of airsoft attachments would be limited for real firearms.

The Main Difference Between Airsoft Guns and Real Guns

To better establish why airsoft red-dots can’t be the best options for real guns, let’s talk about the differences between airsoft and real guns.

Airsoft non-powder weapons and actual firearms may look exactly alike that even the authorities find them difficult to tell apart but they’re very different things where it matters. The construction alone will tell you that the two aren’t identical.

For starters, a lot of airsoft guns are made with hard plastic. Sure, there are also lots of great options made with steel but even those are still made with different materials as real firearms.

Then, there’s also the amount of force these guns make. As expected, real firearms have higher muzzle velocity so they promise to generate more damage. Actual pistol guns can start at around 650 fps while guns with higher than 555 fps will not be accepted at airsoft events.

Another notable difference between airsoft and real guns is the recoil. Also known as ‘kickback’ or ‘kick’, it refers to the backward movement the shooter experiences upon firing a gun. It’s created when gunpowder ignites and propels the bullet forward. Some find it to be a bit intimidating.

Do airsoft guns have recoil?

Yes, all airsoft guns have recoil but they’re not very noticeable. Since they don’t create as much force, there’s not a lot of kick when you shoot an airsoft gun. For those who like the feel of recoil, gas blowback guns are the best options.

What does any of these have to do with the use of airsoft scopes on real guns, you might be wondering?

Taking into account that the construction of airsoft guns are different from real firearms, it can be assumed that the attachments for them are made differently, too. Combine this fact with the amount of power each can produce and it’s easy to connect the dots.

Simply put, airsoft scopes and attachments might not be sturdy enough to handle the force that an actual firearm can create. As a result, using replica accessories might not promise the best results.

The recoil alone from real guns might already throw off and break the materials used in airsoft guns. So if you’re thinking of getting cheap airsoft accessories to use for your real firearm, be aware that they may not survive the sharp recoil force and the impulse that actual guns can create.

If you’re still not convinced that airsoft scopes might not be a good fit for real guns, let’s discuss the difference between the two.

Like with guns, airsoft scopes are replicas. They’re pretty much of lower caliber since games don’t necessarily need that much power and functionality like real gun accessories do. This is why you can expect real scopes to be of better quality with more features in them.

Again, like with the guns, airsoft attachments are not made of the toughest materials. They don’t really have to be spectacularly sturdy since they’re not meant to handle high amounts of force and impact.

Scopes for real guns are made of high-grade materials and construction since they have to deal with recoil and great amounts of impact. This makes them sturdier, overall.

Features-wise, red-dots for real firearms are typically loaded with more functionalities. They tend to have higher magnification and better dot intensity. They can also be equipped with additional features like anti-fog and special lens coating.

But another important difference between the two in terms of features and build is their mounting system’s design. Airsoft scopes might not have the most secure designs while the ones made for actual firearms are very particular about this detail.

From these points, you might be able to get more ideas as to why airsoft optics are not recommended for use on real guns.

However, if you want to use this detail to assess an airsoft scope’s performance and durability, it can be quite a good benchmark. If you’re going to test it out yourself, however, you might need to be ready to waste some scopes as they might not be able to withstand the testing procedure.

The Benefits Of Using Airsoft Optics On a Real Gun

The Negatives of Using Airsoft Optics On a Real Gun

Making the Case for Using Real Gun Optics for Airsoft

What if you turn things around and use real gun optics for airsoft instead? Well, this is something lots of serious airsoft players have been doing for quite a while now and it somehow makes sense.

With real gun scopes being made of high-quality materials and construction and loaded with great features, it can be a good idea to opt for them instead of buying an airsoft red-dot. You might get a lot more use out of these products, so they could be worth the investment.

However, note that they are way more expensive than airsoft attachments. They can go double to triple the price of airsoft scopes so it’s up to you whether you want to splurge or not. There are lots of benefits that might convince you to give it a go, though.

Pros of Using Real Steel Optics on an Airsoft Gun

Cons of Using Real Steel Optics on an Airsoft Gun

Airsoft and real guns are two very different things and the same can be said about their attachments. While they can be used interchangeably, you will need to manage your expectations.

If you intend to skimp and use a replica red-dot on your real firearm, don’t expect the cheap item to last you a long while. Don’t even expect it to hold a zero after a while.

It might be more beneficial to use real gun optics on airsoft guns, on the other hand. Depending on the quality and features of the scope, you can really get a lot out of them. Just be ready to splurge and maybe handle a bit more weight in exchange.

Got something to add to the topic? Leave them in the comments and start a discussion.